Unlike Benrinnes, Dailuaine has been featured a few times already on Master Quill, the last one just a month ago, so it doesn’t need a big introduction, nor does Gordon & MacPhail, the big Scottish independent bottler with an even bigger reputation doing things yet even bigger. We all know Gordon & MacPhail have a lot of series like the Distillery Labels, Connoisseurs Choice, Gordon & MacPhail Reserve and Private Collection, to name but a view. Now there is even a bigger choice with four new, very old, Whiskies in the Private Collection Ultra.

Hey, what’s in a name! I was fortunate enough to have been able to try, three of the four, recently: The 61yo Linkwood (88 Points), the 62yo Glenlivet (89 Points), the 57yo Strathisla (88 Points) and finally there is also a 63yo Mortlach. Well these four are obviously very expensive and extremely rare. For us “normal” people who can’t afford those Ultra’s, here we’ll be reviewing a hopefully very good Dailuaine, one of my favorite amongst the rather unknown distilleries… 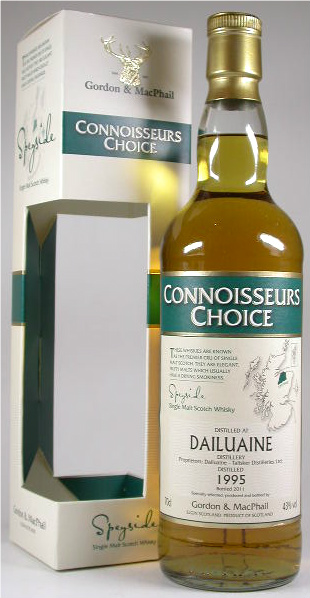 Nose: Floral and spicy. Dusty and spicy wood. Try to imagine the cask from the outside. Hints of mint. Icing Sugar and even some dried tall grass. Malt and honey. Quite some vanilla. After the Benrinnes I reviewed last here we have another refill Sherry cask that impairs a lot of vanilla to the Whisky. Sometimes it smells a bit like a rum with oranges. More fruit with apple skins. Apple pie, yes also cookie dough and with that the spice wood note. Acidic cinnamon. Very good!

Taste: Sweet. Apples, Apple skin, warm apple sauce. Spicy wood. Extremely nice. Well balanced stuff this is. Nutty wood. Nice hint of sweetness that complements the full aroma. I really like this one. I thought the Benrinnes was good, but this is even a little bit better. Spicy wood. Hints of nutmeg and plain oak. Sugared apple. Caramel. Sweet woody caramel and a tiny hint of bitter wood (sap). Not a very long finish, but very tasty. The finish resembles the body. Well made and very tasty stuff.

There you have it. A young and reduced Dailuaine, which when looking at scores is almost as good as the new Ultra’s. This is a new kid on the block, a teenager, and doesn’t have the experience and sophistication of the old Ultra’s. Although the price difference is staggering, there is something to say for both. (If you have the cash).