Talisker Storm is essentially a young Whisky, one of today’s NAS-expressions. A decade ago, this 11yo Mortlach would be considered a young Whisky and back then we hardly ever heard of NAS-Whiskies to boot. Mortlach is known for its unique distilling regime where the Whisky in the bottle was distilled 2.6 times. Mortlach is also known for dark and dirty Sherry bottlings. Mostly first fill and Oloroso. Just have a look at this Wilson & Morgan Mortlach. So Mortlach fits in the group of Macallan (of old), Aberlour, Glendronach and Longmorn.

However, here we have a rather pale expression of Mortlach bottled by Douglas Laing, from the time Fred and Stewart were still running a business together. Douglas Laing had essentially three series of bottlings. Provenance, Old Malt Cask and Old & Rare (better known as the Platinum-bottlings). There were some more, but lets stick to these three better known ones, shall we? Provenance was mostly reduced to 43% and later 46%, Old Malt Cask to 50% (if possible) and generally older and more special. Finally Old & Rare-expressions were cask strength en even older still (and extra special). Maybe there are some exceptions but in my mind all were single cask bottlings. Here we’ll try a young and very pale Mortlach from the least expensive series of the three. Young-ish and reduced. 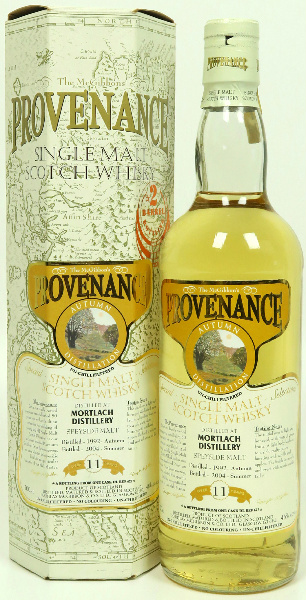 Nose: Fresh, soft and fruity. Some barley and definitely some citrus notes. Very fresh and “summery”. Hints of bread, mocha and nuts, but also a chewy, green oaky note. Vegetal. Green leaves and perfumy. Hints of dishwater and latex paint as well, which really isn’t as bad as it sounds. Powdery and dusty, in part like the smell of old books, some leather and cold gravy. Warm butter and vanilla pudding. Quite a lot happening here, and a bit dirty alright. Although all of the aroma’s I’m picking up here, are pretty different, the whole is well-balanced. They mix together well. Mortlach is known for a meaty element (from Sherry casks), but that is lacking here.

Taste: Barley again and a lot of the vegetal, green and oak notes. Chewy again and it has a short sharp edge from the oak. It’s almost like virgin oak this, with a bite. A little bitter woody bite. Don’t think now this is a bitter Whisky, because it isn’t. The bite itself is extremely short, leaving room for a very soft and mellow Whisky. Cannabis and vanilla. Creamy, with cookie dough and chocolate-chip cookies as well. Sweet(ish) and fruity. The taste of this Mortlach is less complex than the nose. Judging by the color, the cask didn’t seem all that active, but it did impair a lot of the woody notes, so it probably was an easy pick when considering bottling a younger Whisky. Hey, but it’s not all (soft) wood notes, there is also some coconut, nutty and creamy aroma’s. (something you can also find in some Glen Keith‘s matured in ex-Bourbon casks). It’s fruity as well. Medium nutty and creamy finish, with hints of cannabis (the first time around). With a medium bitter aftertaste giving the whole experience some backbone.

Mortlach is known as a dirty, meaty Sherried Whisky. However, this probably came from an American oak cask that previously held Bourbon. So does the meaty part come from the Sherry then? Well not entirely. Especially on the nose, the distillate, without the influence of (Oloroso or PX) Sherry casks, still shows a meaty aroma. Cold gravy I called it, and dirty. It doesn’t taste as a dirty meaty Mortlach to me though. Remarkably soft, and pretty decent overall, yet nothing special as well.