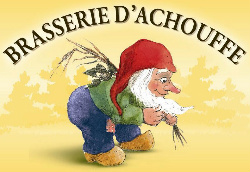 In the early eighties Pierre Gobron and Chris Bauweraerts (Brothers in law, and thus Brothers in Beer) started brewing beers as a hobby, and founded Brasserie D’Achouffe near Houffalize in 1982. Houffalize is in the Ardennes, where lots of stories are about elves (They call the leprechaun an elf).

By now, I have to admit here to a fault in my character. It’s never to late to learn, and boy did I learn here! It’s this leprechaun and the immense availability of both beers made by Brasserie D’Achouffe that made me believe this was not much of a beer. Boy I was wrong! I haven’t tried the main beer by Achouffe yet, namely La Chouffe. But I did buy once a little bottle of its dark sister Mc Chouffe also called: ‘Scotch of the Ardennes’ by the brewery, and me being very fond of my Scottish Whiskies, who am I not to try this Belgian ‘Scotch’. By the way, I Aged the example of Mc Chouffe for 16 months past its best before date, and that is a bit longer than the makers recommend. They like to see their beers aged for 3 to 12 months.

Nose: Fresh, citrussy, but also pretty murky, like a dirty sidewalk washed clean with the first rain after a long hot summer. Yeasty and sweaty with warming alcohol.

Taste: Wow, not as deep as the color suggests, but certainly what the doctor ordered! Quite full-bodied and very tasty. The carbonation ‘effect’ makes this half-heavy beer refreshing. Candied Sugar wine. Not bad, not bad at all.

I don’t know about the ‘Scotch’, but it reminds me more of an Belgian ‘Wine’. Take care not to pour the depot into your chalice. It’s better to consume that by itself. With this extended ageing I like to do, the depot left flakes floating in the beer, and that didn’t look very nice…(but tasted great).

Points: 84 (provisional, I might have aged my bottle for too long, as mentioned by the brewers, so I’ll try Mc Chouffe again in the near future, and will try it younger).