Here we have a bottle of Batavia Arrack. Batavia tells us this Arrack is Indonesian made. On the island of Java to be precise. However, the label classifies this as Indonesian Rum, and although I understand the claim, it is not entirely true. (Batavia) Arrack is similar to (Indonesian) Rum in the same way Tennessee Whiskey is similar to Bourbon. So not identical twins.

Arrack is made in Southeast Asia and is something entirely different from Arak (Anis flavoured drink from the Middle East). Arrack, as it is made in Indonesia, is made from sugar cane molasses and distilled twice in Pot Stills. Fermentation of the wash is started with yeasts found on local red rice. This particular Arrack is aged in Indonesia as well as in Amsterdam (The Netherlands), where it was also blended. Indonesia being a former Dutch colony, most of the Arrack produced there is exported to the Netherlands and passes through the hands of E. & A. Scheer, Dutch importers of large amounts of many different Rums. (For those of you who don’t know about E. & A. Scheer, but do have an interest in Rum, please have a look at Matt’s excellent piece when he got a chance to visit the company). 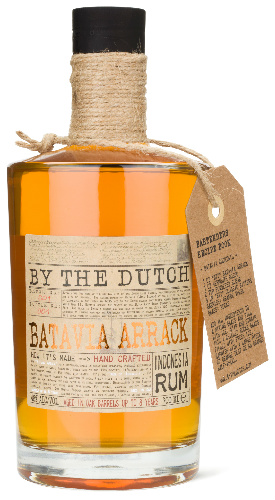 Nose: Initially sugary (from a distance), but when you put your nose in, you know you don’t have a typical Rum in your hands. Funky Worcestershire sauce on paper. Dry, dusty and nutty. Influence of oak. Grain Whisky and Old Genever. It also reminds me of Rhum Agricole. Amazing how this changes in the glass with some breathing. Short ozone attack with warm caramel (as in creamy without the sweetness). Fresh air after the rain. It’s the closest to Whisky of any Rum I tried, apart from some initial alien notes, that is. The ozone turns into a breath of fresh air. Warm food, and the metallic part of blood. Sounds strange but it works well. With enough air, this reaches a nicely balanced state and all the ‘strange’ notes somehow dissipate. Mild spicy oak and a mere floral hint. Peach yoghurt. Soft with something herbal I can’t put my finger on just yet. Cold tea and cold gravy comes to mind. Dry, creamy and quite complex.

Taste: Wood comes first, quickly succeeded by a more creamier feel. Toffee and latex paint. Honey without the intense sweetness. Definitely sweeter than I’ve come to expect from the nose though. Throughout the body there is this backbone of medium bitterness. Bitter oak and chalk. Wood driven. The bitterness even grows towards the finish. More hints reminiscent of Rhum Agricole (even though this is made from molasses). Still creamy and without any hint of acidity whatsoever. So, no sweet yoghurt in here, but there are some oriental spices. The sweetness turns out to be something from the first part of the taste, because soon, under the leadership of wood, the dryness takes over. Late to the party (again) is a floral note, which seems to turn into a more soapy note towards the end (and is gone when its time for the aftertaste). Another note comes up reminding me of the ozone from the nose. However I have never tasted ozone before, so again something hard to put a finger on.

Definitely of sipping quality and definitely a (Batavia) Arrack and not a Rum, by how we know them. Sure, it’s related to Rum, but also a class of its own, just like Rhum Agricole and Cachaça are. It’s not an easy sweet sipping Rum, but it did grow on me, just like I had to adjust to Rhum Agricole. This Arrack is good stuff and worth your money, if you are willing to work with it a bit. It gains a lot from some extensive breathing. If you are still reading this, you must be an aficionado, so you might want to have a go at this. It is still around and I’m sure there will be more batches available in the near future. It’s well made, elegant, but also a bit bitter at times, so expect something with a backbone and character. For a molasses based product it is amazing how this has a lot in common with Rhum Agricole.