What catches the eye with this beer is the statement: “bier met smaakevolutie” thus stating that this is a beer with an evolution in taste. Great! I love that in my drink. Evolution.

Oud Zottegems Bier is made by the Crombé brewery in Zottegem Belgium established around 1800 and is called a (sour) brown beer. To be frank. The installations of Crombé are crap and worn out, so the beer is really made by Strubbe in Ichtegem upholding the original traditions. 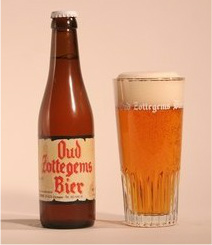 Color: Murky brown, not much foam.

Taste: Slightly sour, which adds to the complexity and balance. To be appreciated here. Very tasty and carbonated feel. Toffee with a hint of banana and spice. Mocha and slightly bitter. Citrus.

Ehhh didn’t catch the evolution there… but it has its complexity.

Well some tips then. It is said that this beer get better when you put it in your cellar for a while. Mine was lagered and was quite nice.

I would say. Drink this beer! It’s very nice ánd nearly extinct. It has become a very regional beer and deserves a lot of attention. Losing this would be a shame. I’m definitively buying this again, but sure am curious for the Grand Cru version of this. So thumbs up and a well-earned: