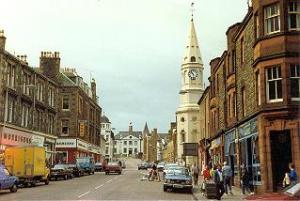 Next up Glen Scotia, also a first on these pages. Glen Scotia hails from Campbeltown, once a big place for whisky with regional status (again). Try to imagine a place that has almost 30 distilleries working at one time in the 19th Century. Not so long ago this Glen Scotia was the ‘other one’ from Campbeltown after the well-known Springbank. Today Springbank makes also Longrow and Hazelburn. And from the same owners the recent ‘addition’ that is Glengyle Distillery (Kilkerran). Let’s say that Glen Scotia is the only Campbeltown distillery not owned by the people of Springbank. Owner today is Loch Lomond Distillery Co. and the place is fairly run down. When the distillery was mothballed in 1994, the staff of Springbank restarted intermittent production in 1999, not to lose the regional status of Campbeltown. A status lost eventually, but eventually reinstated.

The distillery was founded in 1832 by the Galbraith family. For one reason or another the label on the bottles state 1835. Lots of changes of ownership during the years and even some closures in 1928 and 1984. Since 2000 Loch Lomond has taken over Glen Scotia and runs the distillery with its own staff.

Nose: Very musty and dirty. Fruity as in fresh sweet apples mixed with apple compote. A very nice hint of smoke and coal that reminds me of an old steam locomotive. It actually smells like something from the industrial revolution. Old Skool? Lets move on. Mint and still a lot of apple. Lit matchstick. Nice balance and easy. Not very complex. Underneath it all, a sort of sweet wood smell, very laid back.

Taste: Wood and toffee. Caramels and quite a bit of ash and toasted cask. A nice bite and definitely a firm body. Sulphury (of the egg kind) and quite some oaky and milky sourness. Actually I get some more egg notes, especially boiled egg (the white part). Closing in on the finish, it dries out a bit, and is not as big as expected. Here the wood plays a much greater role, than on the nose. Not as balanced as the nose.

Usually you’d expect more color after 18 years in a First Fill Sherry Butt, so this must be a Fino (again) and it kinda goes into that direction.

I was asked to keep an eye out for sulphur in this one. It’s there slightly on the nose (as a burning match). But it is more pronounced on the palate (the bite here comes not only from the wood, but also from the sulphur. Usually there is some sulphur in Sherried Glen Scotia’s. Lots of it in a 1991 Cadenheads offering if I remember correctly. It’s there on the palate and even more so in the finish (late). Is it ruining the balance or the palate? Does it disturb me? No, it’s some kind of good sulphur. it’s somewhat hidden. It’s there but not in the usual obvious way. That happens sometime, that’s why I called it good sulphur. Still, overall there isn’t a lot of sulphur in this one, so don’t worry. And hey, sulphur is good for the skin!