WMD stands for Whisky of Mass Distinction. A name one would find on a Frankie Goes To Hollywood 12″ in the eighties. Two years earlier the first WMD was released (a 19yo from 1984) and had a rocket on the label. This second “weapon” is a Yellow Submarine.

Most of us would have thought of the Beatles, but this time it about another submarine. One owned by the Royal Navy of Great Britain.

Islay Fisherman Baker was at sea to check his lobster baskets, when he saw a yellow object floating just under the surface of the water. Which first seemed a buoy seemed to be a 2 metres long radio-controlled mine detector from the Royal Navy. When Fisherman Baker called the coastguard informing them that he spotted a submarine with markings from the Royal Navy, they told him to he was drunk, not very uncommon on such an Island. 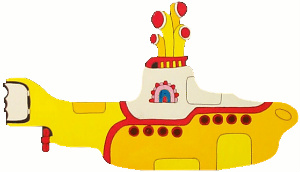 Just days later the Royal Navy admitted they had lost HMS Penzance (The Yellow Submarine) in a drill. But just after 6 months they decided to pick the thing up> They sailed out at night, to arrive very early in the morning, not to draw a lot of attention to the operation. But the people of Islay are no fools, so half the Island was present at the beach. 12.000 bottles of Yellow Submarine were made and the Royal Navy got six to commemorate the incident. Later the French manufacturer of the Sub ordered another 1000 bottles of this edition for marketing purposes… 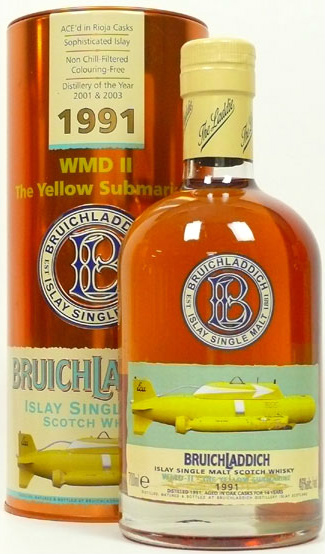 Nose: Woody and smoky. Quite estery and fruity as well. Clay and wet earth. Chewy (in the nose?). In a way candied and wine-treated (it is ACE’d in Rioja Casks, well that’s very Obvious in the nose). The wine finish takes the nose hostage, never to let go, whatever ransom you’re prepared to pay. Is that a bad thing, no not really it is likeable in the nose. I just hope is does the palate some justice. Creamy milk pudding. Powdery perfumed wood. Fresh.

Taste: a bit harsh and winey from the start, but it seems balanced. Wood and milk chocolate pudding. Creamy. Also a little bit from the wood and a wave of sugary sweetness. The palate is very nice, but also very simple. Probably a good idea to reduce this to 46% ABV, because now we have a very drinkable whisky. Nothing overly special though, with also an unspectacular finish, but it definitely is all right!

Well this most definitely is a Rioja finish. The Rioja is all over the place. It draws all attention to itself. Although wine finishes almost every time ring my alarm bells, this is not bad. Alas the maker doesn’t state what kind of Rioja it was red, white or rosé, although rosé would be pretty uncommon, most probable would be red. Most used grape variety in Rioja is the Temperanillo grape, remember the Temperanillo casks used by Tomatin?