Time for another Balvenie, excuse me, “The” Balvenie. Some say it is some kind of middle of the road dram, and yes there may not be a true cask strength version around. Some say you’re foolish for sometimes spending a lot of hard-earned cash on a Whisky that is in no way full of aroma and almost always diluted. Yes sir, we’ll add the water for you and charge you more for it. They might be right but they also might not get it at all, or at least some of the time. Most statements might be true, but that doesn’t mean The Balvenie is a bad Whisky. Far from it. The Balvenie is about delicacies. It is some sort of homeopathic Whisky. Just a tad of wood here, a tad of wood spice there. A splash of Rum wood for that one and let use a spoonful of Sherry wood there. This time we do not get a peated Balvenie, but we get a Balvenie with a pinch of peat, subtle difference. This version was launched in 2010 and replaces the Islay Cask version which was made with ex-Laphroaig casks, and this one is said to be made with casks that once held peated…Balvenie! Wow. 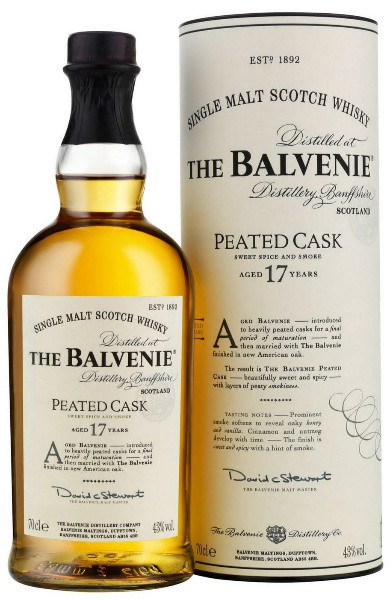 Taste: At 43% it is hardly too light, and it is a warming Whisky. Suits the bad weather outside. A nicely balanced liquid that pours down gently into ones throat. Smoky sweet vanilla, definitely American oak, with notes of peat and tar on top. Not woody at all. Sweet vanilla, but also hard candy sweetness, but not the fruitiness of those sweets mind you. Sugared apricots and honey drops. Cold black tea. Quite a long finish. Lots of staying power. Not really a peated Whisky but a peat flavoured Whisky. Nicely done. Definitely a step up, and sideways (for the variation), from the 15yo Single Barrel and probably my favorite Balvenie with the 21yo Port Wood. Ok, some of the 25yo’s and the thirty are pretty good as well.

This version is bottled at 43% ABV but there is also a higher strength version around. Cask strength, you ask? No, not quite, 48.7% ABV. Batch code on the reviewed bottle: L9097OK.

This one is for Colin and Krzysztof, sorry I couldn’t make it guys.