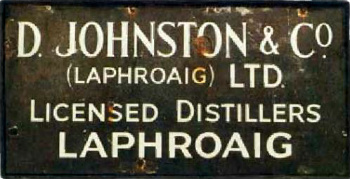 The dark side of the moon. We are now most definitely on the other side of our Laphroaig Week. It started with the highly visible and upfront official bottlings, pivoted around yesterday’s Kintra Laphroaig (sunset Sherry) and now the final stretch home. This final trio starts with this more obscure Whisky, hiding in green glass aswell, but not released by its maker, but sold of for blending purposes, I guess, but rescued from mediocrity by focussing on its single cask traits. Today we’ll be looking at a Laphroaig bottled by Independent bottler Douglas Laing. Douglas Laing started bottling two Laphroaigs under the alias ‘Laudable’ in 2000. Both were 15yo and 1985 distillates. Using the Laphroaig name three further 1985 distillates saw the light of day as 17 year olds. Next up were a large amount of bottles distilled in 1987 and our DL REF 814 is one of them.

Nose: Extremely closed. Quite light and friendly in the nose. Citrus fruits and smoked cold citrus flavored tea, yes Lapsang Souchong comes to mind. Also a promise of sweetness. Not your heavy hitting peat and smoke emitting monster. Nope, nothing like that at all! Very light end vegetal. Pot plants and warm dried out flowerpot dirt. Slightly meaty and quite a buttery smell which occasionally emits a fruity acidic smell. Pear is added to the citrus. Vanilla with a tiny hint of cigarette smoke. Sweaty and even some tropical fruits like pineapple. Didn’t see this coming! Given some air, a slight dab of smoke emerges as well as some peat. It’s almost like the liquid is holding back the aroma’s from emanating. Nice to see how well all these aroma’s fit together.

Taste: Half sweet and slightly buttery again. Lightly smoked almonds. Fruit syrup. Lots and lots of licorice, ashes and a bitterness that seems to come from smoke. Lightly toasted almonds now with hints of lemon. The acidic citrus note is a great counterpart to the smoke, butter and vanilla. The almond taste stays on for a long time. Altogether half-sweet with toffee throughout. Little hint of mocha-coffee and milk chocolate and even some whipped cream enters the fold occasionally. How is that for complexity? No heavy peat nor a nice garden bonfire so get that out of your system before tasting. Warming.

Quite a strange Laphroaig this is. At first hand it’s not very open and invites you to work it out of the glass. In the end it ís willing to show itself and slowly it emerges out of the glass. Forget for a while this is a Laphroaig, just imagine an old Islay Whisky. The beauty here lies in the details, in the frail and brittle aroma’s, in the great balance and nice complexity. Granted not an easy malt, but if you have the right mind-set it will reward you big-time. So very, very different from regular releases and the profile Laphroaig normally is known for.