Back in the lion’s den. Purely by coincidence, I recently reviewed some independent bottlings of Whiskies produced by distilleries of Pernod Ricard, like Braeval and Glenallachie, but also some official bottlings like Strathisla 12yo, Aberlour 16yo and The NAS Glenlivet “Founders Reserve”, but also the nice AS Glenlivet from 1983. Now another Glenlivet, and yet another new NAS bottling. I promise you, I’m not sponsored!

The Glenlivet Founders’ Reserve is the new entry-level Glenlivet that replaces the 12yo in Western European and some other markets except Asia and the US. This NAS Oloroso Nàdurra replaces the nice AS 16yo Nàdurra. I know, that one came from Bourbon casks only. However, the 16yo Nàdurra will be replaced by three new versions that will be called…Nàdurra. The first one of these is this NAS Oloroso version, soon to be followed by a NAS Bourbon version and later a NAS Peated version. Since both Aberlour and The Glenlivet have the same owner, everybody will be comparing this one to the Aberlour A’bunadh. 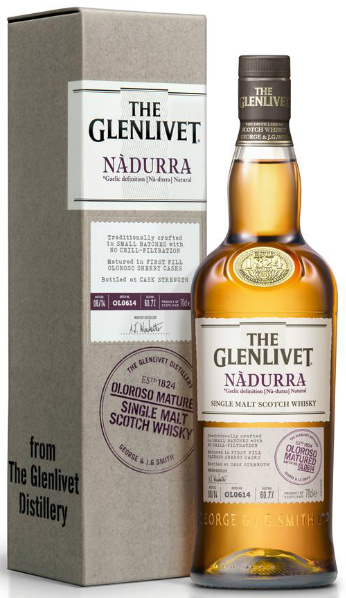 Nose: Lots of vanilla, new wood and a bit sharp on first sniff. A breath of fresh air. Spicy wood and pencil shavings. I get a lot of pencil shavings recently, maybe its me. I don’t get a lot of A’bunadh like first fill Sherry though. Considering the color and also the way this smells, my guess would be that this Oloroso Nàdurra is younger than its sister from Aberlour. A’bunadh is pretty up front dark first fill Oloroso, and this Nàdurra is not. It really does smell like a young whisky with nice notes of wood without being overpowered. Nice, but not complex. The wood also gives off light chocolaty notes and some sweetish vegetal bits. Old bar of soap (from the eighties) and some licorice. For me a lot of these aroma’s come from wood and obviously from the Sherry used, but for me they aren’t typical Oloroso aroma’s you get from an A’bunadh. Wood it is then.

Taste: Sweetish and a bit hot. New wood, tree sap with its light bitterness. Coffee and licorice, a nice combination. Hints of glue. Prior to swallowing a hint of, and here it comes again, pencil shavings. We all have chewed on a pencil some time during our lives haven’t we? Italian laurel licorice. When the wood, a slight hint of bitterness, and the high strength pass, not a very big finish remains. Youth?

A young Whisky that by itself is a study of wood and not of Sherry. It isn’t complex, slightly underdeveloped, and it surely does have its moments. I guess the choice is right to think of this Whisky a bit as a Whisky for…well, not entry-level, by bottling this with a high ABV. Another good decision is probably that it is made to another profile from the A’bunadh which is more about the Sherry itself, whereas this is more about the wooden cask itself. Nice stuff, helped along by the high strength and spicy wood. Younger and really no match for A’bunadh in my opinion, but those who like higher strength Whisky, but found the A’bunadh too much, will disagree. (maybe a comparison to Benromach 10yo 100 proof would have been a better angle…)