Oranges and Whisky, where have I heard that before? Ah yes the new Amrut. This Orangerie isn’t Whisky, but it isn’t a liqueur either, as it doesn’t have the required additional sugar. Orangerie is made with soft and sweet Malt and Grain Whiskies, infused with (a lot of) Navalino orange peel and Indonesian Cassia bark, a kind of cinnamon and Cloves from Sri Lanka. It almost sounds like the desert from the menu of a very posh restaurant. The Navalino oranges are hand zested at the Compass Box HQ. So when coming in to the office they never know what John has in store for the people at Compass Box. 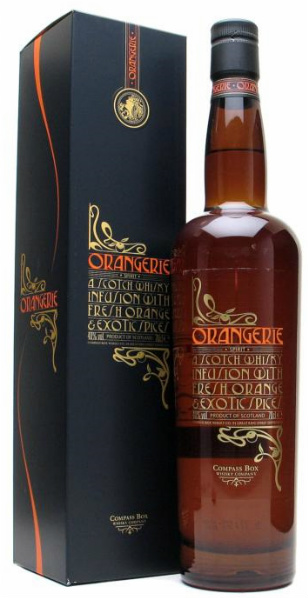 Nose: Oranges and dark chocolate. Orange skins yes, but not a lot of orange juice. Still there is some juice in here to be found, it has some hints of orange pulp. Hints of vanilla and lots of cloves. The bark used seems to be the glue that holds it together. Smelling it more vigorously, yes there is some Whisky underneath. It smells like something you’d combine with dark chocolate. Give some time, this has also a floral part, but also another dimension of the fruit emerges. Very strange but in the distance it has some characteristics of Gewürztraminer. Not a lot, but some if it is in here.

Taste: Not sweet at all. It’s Whisky all right, orange skin and spices. That’s it. No sweetness. Tiny hint og bitterness, enough to give it character, but too little to overpower. Try it again and forget the statement that this is a liqueur, because it isn’t. Not enough sweetness. It’s all aroma. Take another sip. Just like the nose, it has a lot to do with dark chocolate. On the palate it’s in the spirit already, but this has to be combined with dark chocolate.

Special stuff, and a niche by itself. It claims to be a Whisky, it’s not. It has additions, so it’s not a Whisky anymore. It claims to be a liqueur, but it’s not. Not enough sugar. No bad thing, this will save your teeth. Nope, it’s something else. It’s a quality mixture. Not something for every moment though. You won’t empty it quickly. Once in a while, you just want to take a sip of this and pair it with nice dark chocolate…