In the more recent past when Bruichladdich had different ownership, a lot of bottlings saw the light of day and a lot of bottlings comprised the standard range. Now that the distillery has changed hands and tries to be a fashion accessory, the stanf=dard range is reduced to only two NAS bottlings. Scottish Barley and Islay Barley. If my memory serves me well, all standard bottlings with an age statement have been dropped.

In 2013, this same Whisky was released with a somewhat different “label”. The first release had big lettering for “Scottish Barley”, whereas the 2014 release I’m about to try, has “Classic Laddie” in big lettering. I have tasted the 2013 version and scored that one 85 points. Let’s see if this newer version is equally as good. 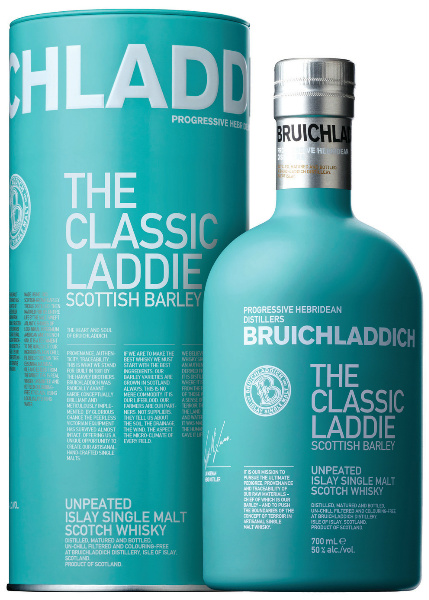 Nose: Well this is a nose that screams Barley. Very young smelling and even has some Bladnoch-butter. Fatty, with a citrussy edge. Hints of new make spirit, and given some time to breathe, a more bread like, coffee and milk chocolate note appears. The whole is quite soft. Wet. fresh wood. Virgin oak. Nevertheless it is also recognizable as a Bruichladdich. It does remind me sometimes of the Cadenhead Bruichladdich 17yo I reviewed earlier.

Taste: Soft paper like wood and an extremely creamy taste. Coffee with a lot of milk. Chocolate milkshake. When the higher ABV flows down my throat a short flash of hotness flies by, but also dissipates quickly. Cream with a hint of ashes. Bourbon and vanilla, but also dark chocolate and a faint fruity note. Cherry liqueur bon-bon? Virgin oak again. Lots of barley (and sugar?) in the finish. Barley, oak and cream are the three words that describe this Whisky best I guess.

As consumers we are compensated. We get less ageing and less complexity, but we get more ABV. 50% to be precise.

Here we go again, another NAS bottling that will split the Whisky world in two. Definitely a young, crude and uncomplex Whisky, but at the same time a nice and designed sophisticated soft taste that a lot of people will like. The Bruichladdich spirit is a good spirit, but this spirit didn’t get a whole lot of time to develop. It’s like a child asked to drive a bus. Some would even say that this isn’t really Single Malt Whisky. If someone had invented this about a 1000 years ago, he or she, may have called it Barley Wine. Not bad, but not my NAS of choice.