Borgoe is one of a few (Rum) brands of Suriname Alcoholic Beverages (SAB for short). Other Rum’s made by SAB are Mariënburg and Black Cat. Both are White Rums. SAB is foremost a producer of Rum, but also some Vodka is made. Besides this, SAB also functions as an importer of several foreign “alcoholic beverages”. SAB was founded in 1966, but its predecessor was founded in 1882 as the “Suikeronderneming Mariënburg” and today is one of the most succesful enterprises of the country. To commemorate its 40th year of existence, the 8yo Borgoe was released in 2006. Borgoe 8yo has fully aged in American oak barrels straight from Kentucky. 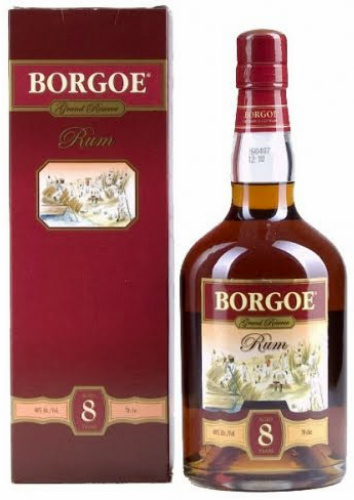 Nose: Nicely sugared, hints of fruit and full on aroma, that leaps out of my glass. Lively and leathery. Sunny and happy, this want to be drunk (pun intended). Heavy fruit syrup and elegant wood. The heavy nose is not always sweet, It has its dry spells. After a while, the wood starts to play a bigger role, but foremost a sort of vanilla powder, locked into the woody backbone is present. Wet warm cotton with a meaty twist to it. Powdered coffee creamer. Sometimes the heavy aroma retreats and it allows some notes of black tea and licorice to escape from the glass. When this happens, the fruit takes a back-seat as well and a more floral note appears, honeysuckle, so not typically flowery-floral. Sawdust, new wood, not particularly an oak aroma though, and a tiny hint of ashes. Even though I used many words up ’till now to describe the nose, I wouldn’t say it’s as complex as it seems. Medium complexity it is then, but, there is evolution in the nose. The sweetness retreats even more, the “wood”, played its part and now a more plant-like aroma emerges. Dried and fresh. It’s a more overall feel, so hard to pin anything down, although lavas seems to be one of them, as well as italian laurel (licorice). Funky.

Taste: Caramel, wood, burnt sugar and toffee, but the sweetness speeds down my throat, and a more watery episode follows. In that watery, and thus, thin episode, the licorice from the nose pops up. Sugar water with toffee aided by a wooded note, nothing more really. The nose presents itself as syrupy and heavy, but the taste and especially the mouthfeel is not. Definitely getting more oaky now, but not fat succulent old oak, but a younger type of oak, young, fresh and slightly acidic. Tree sap. Quite a short finish, also slightly unbalanced. Overall it tastes nice, but quickly gone. The, slightly bitter, Italian laurel licorice really shines in the aftertaste.

Tasty stuff that could have been more like a Pussers or Demerara style of Rum, judging by the nose alone. It isn’t, and maybe it shouldn’t. Where in Demerara the nose, the taste and the body are heavy, here it comes across as too much reduced, where some aroma’s even seem to be stripped, thus missing some complexity. I can’t explain that. The watery part is obvious, but missing something from the body is a first for me. Still, it’s a nice sipper, easy-going and easy drinkable. Although it looks like a premium Rum, it drinks like a daily drinker, a sipper, not a mixer. But for the money I expected a more complex Rum. Nevertheless, good stuff, so no cause for alarm, although I feel SAB can still improve on this Borgoe Grand Reserve, and turn it into a really good Rum.