So the Springbank 10yo is always a nice dram and really affordable to boot. Springbank 15yo is usually quite a different dram, never simply only an older version of the 10yo. We already know there always is quite some batch variation with Springbank, and we love that. Not every consecutive 15yo is similar to the previous one, and now the 15yo is not a mere step up of the 10yo. Apart from the taste of it, probably the reason a lot of anoraks love Springbank. So without further ado lets finish off this rotten year 2015 (at least for me it was) and aim for a better year in 2016. So I’ll see you again next year, in good health. Slainthe! 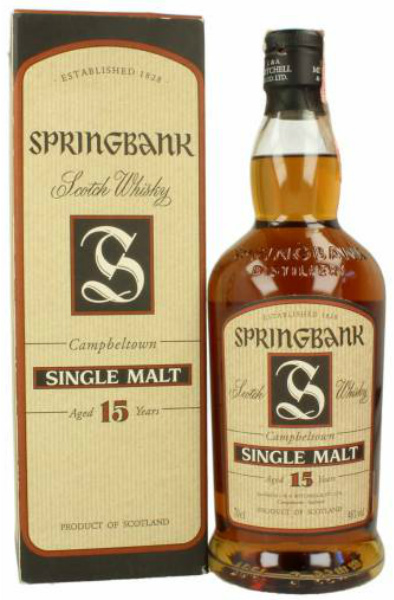 Nose: Funky Sherry, right from the bat, mixed with fresh air. Something completely different from the 10yo. More fruity with fruity acidity from all kinds of different fruits. Apply acidity as well as acidity from dark fruits. Dry and dusty. Lean and sharp, as opposed to the fatty vanilla from the 10yo. It’s not just an older version of the 10yo. Small hints of peat as well as (only) a small hint of the clay and wax from the 10yo at first, but these aroma’s, as well as the sweetness, develop a lot over time, so give it time to grow. Wonderful stuff.

Taste: Sweetish, red fruits, cloying syrup. A bit Port like. Toasted cask. Peatier than the 10yo, but the peat is well hidden behind the Sherry notes. Definitely a lot drier and fruitier from the 10yo. Alas, just like the 10yo, this has not the longest of finishes and the aftertaste is not particularly big as well. Lovely development towards more fatty peat and oil and sweet tar and a hint of licorice and sugared black tea. Extremely well made and balanced.

I remember when this was released, it wasn’t a very popular bottling. Sure it deviated quite a bit from the usual Campbeltown profile. Even today the 15yo isn’t the most popular Springbank. People seem to dish out more for the old 10yo than for this old 15yo. I’m just happy it is here and it is different from the 10yo. I love both, but for me the Sherry brings something new to the Springbank table, and therefore will score this slightly higher (and because I like it more).