On with #2. The second installment is the Manzanilla Finished one. Quite the logical #2, since Manzanilla is also a type of Fino Sherry. Manzanilla is made in the town of Sanlúcar de Barrameda in Andalusia. Just like Fino, it is a very dry and pale kind of Sherry. The region is less hot and more humid, so the flor here is even thicker, giving an even better protection against oxygen. Manzanilla’s are therefore even fresher than their Fino-brothers. Manzanilla’s also have a somewhat salty feel to them. The Sherry ages near the sea, but should that allow for a more salty liquid? In Spain, Manzanilla means camomile tea. The Sherry is named as such, since the aroma’s are thought of resembling camomile. So salt and camomile are the things to look for in a Manzanilla Sherry, but are they also the things to look for in this Whisky? 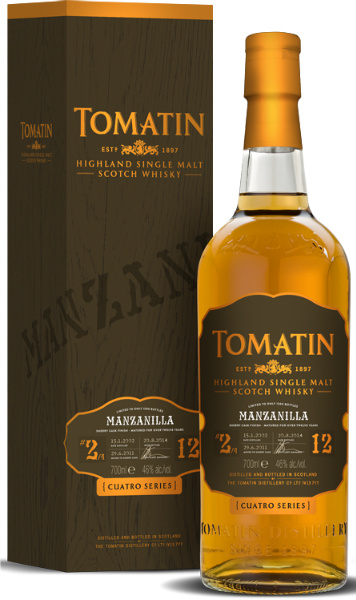 Nose: Starts immediately less funky than the Fino. It also doesn’t need a lot of time to breathe, to settle, its ready for consumption right of the bat. Subtler and more restrained. Hints of burning wood and toasted cask. Dry grass, vegetal and dry warm barley. Easier than the Fino and seems less complex as well. Sweetish and again full on aromatics. Just not as thick and cloying. Smells nice. Fruity, and quite similar to the Fino expression. Tropical, ripe, sweet and aromatic fruit, which is typical for the Tomatin spirit. Dried apricots, but also a hint of bicycle tire. If you ask me, no traces of camomile in the nose. Salty? Nope again.

Taste: Sweet and boasts a fruity start. Chewy toffee. Fruity, yes, but this time slightly fresher and more acidic. Fresh green apple skin and white pepper. Not (as) hoppy as the Fino, but there are some fruity Beer aroma’s to be found towards the end of the body. The wood moves into the realm of pencil shavings. I don’t get the camomile one might expect, nor do I find it salty, although I do have slightly salty lips. Quite a simple expression. Likable, but simple. Maybe next time they should finish this for a while longer, although this finish carries just enough bitterness for me.

Slightly more approachable than the Fino, but with that also slightly less “special”. Sure, you have to work the Fino a bit, and its start can be a bit of a scare, but when it opens up, lots is happening, especially on the nose. Yes the Fino has definitely the better and more complex nose of the two. In the taste both are closer to each other. The Manzanilla expression actually doesn’t show as much development in the glass as the Fino. It is immediately clear what you have in your glass. This one is more of a daily drinker. No faults, but also no ooohs and ahhhs as well. Good, but not as special as the Fino. However, I do feel that these casks that once held Sherries that aged under flor, show a lot of potential for ageing and finishing Whiskies, and especially the tropical fruit spirit of Tomatin.