We move back a decade or so to visit one of our old friends. One of the most standard bottlings of that time, the original Macallan 10yo. It had an age statement back then and was diluted to 40% ABV. It was the time, no fan of Macallan or otherwise, was aware of the dark clouds that were forming up ahead. Finally the storm broke and we were given the Fine Oak series. So for me the downfall in quality started with bottlings issued in the newly designed bottlings like the “Fine Oak” series. However, if memory serves me well, in 2002 they started releasing some sort of NAS called the “Elegancia”, preparing us for a softer and smoother experience, moving away from the true Sherry experience of the true Macallan. Not truly a NAS by the way, since it did carry a vintage, like Elegancia 1991. Nevertheless, after the Fine Oaks I really didn’t look back. I was so disappointed. I turned my attention towards Longmorn instead. Back then a lot of it was around and at fair prices to boot. The standard 15yo was pretty good, although the introduction of the 16yo made me rise my eyebrows a bit. Better looking bottle, but the Whisky was less interesting. No, may independent released some pretty stellar Longmorns, so I needn’t look back at Macallan. Of course I did try some of the newer bottlings, but I was never convinced moving back towards the Macallan. Only the future can tell us. 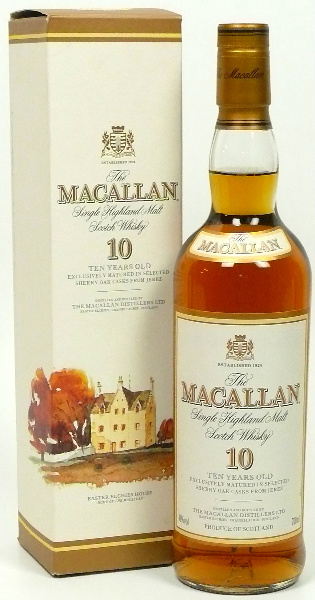 Nose: Wow, very aromatic. Heaps of Sherry. Extremely fruity, Cherries, apples and banana. Simply wonderful. Already from the start a nice backbone of (new) Oak and a promise of toffee’d sweetness. Warm runny caramel. A lot is happening from the start and it only needs little time to reach a nice balance. This is how I remember drinking Whisky a decade ago, without even giving it much thought then. Stuff like this would be around forever, wouldn’t it? Damn, why is it so hard to make something like this today? Ice cream, vanilla, caramel, laced with apples. Sugared apples and a splash of plain and simple refined sugar-water. Fruity, but not only apples. Sugared cherries and hints of mango and passion fruit. A tropical mix that could have been an older Tomatin. Resembles Tomatin 25yo a bit. Thick and cloying at first, but give it some time to breathe and the whole gets thinner. I wouldn’t say it dies out on us, but it does get a bit more restrained. Balances out. Every time I smell this I get hints of well made Calvados. It becomes fresher. More waxy apple skin aroma’s emerge. When you look for it, there are hints of toasted cask. Hints that are more upfront in older good Ex-Sherry cask matured Whiskies.

Taste: Simpler. Starts out soft and sweet, but not as complex as the nose. Tropical fruits and runny caramel again. Is is youth? Probably not. Is it reduction? I guess so. Sweet and on entry, sometimes like someones bad breath mixed with cardboard, what? Relax, it’s not that bad actually. This time around definitely some toasted cask in the mix, which does wonders for the balance. It gives the fruity and fresh Whisky a nice backbone. Slightly bitter oak, slightly burned as well. New sappy wood aroma is also present, although it is highly unlikely new wood was used, but you never know don’t you. The wood is sappy and sometimes a bit harsh and upfront. It’s the “burned” sensation however, that stays well into the finish. Also a nice and rich nuttiness appears towards the finish, combined with the cardboard we found earlier. For a 40% ABV Whisky this has a pretty lengthy finish, but no, it’s not long.

Tasting it now, in 2016, this is high quality by todays standard. Remember this was the simplest of Macallans some ten years ago. Sure, Italy had their official 7yo, since they like young and fresh Whiskies. Hard to believe not so long ago this was entry-level stuff. Today this would have been packaged in a shiny box that costs more than the  Whisky itself did ten years ago. You don’t want to know even how much it would cost today. Looking at auction prices, I would say every time, you get a fair deal when you want to buy one like these. Go for it. They don’t make them like this anymore.