Today there are a few NAS Cask Strength Whiskies on the market that haven’t received a funny marketing driven name. Sure among many others, f.i. Ardbeg Corryvreckan and Uigeadail are very good, but considering the owners of Ardbeg, marketing is a given. There are also a few quiet boys in the back of the class, whispering about quality and quality only, not caring too much about marketing and don’t spend their money even on getting a funky name. A few of those come to mind as well. The last review I did is even one of those expressions. Glengoyne “Cask Strength”. Others are Tamdhu, Glendronach and Tomatin to name but a few. I never got around to review the original Tomatin Cask Strength, but now I have a chance at the first batch from last year’s newly designed release. As mentioned on the box, this Whisky comes from Bourbon and Sherry casks and will be an interesting comparison to Glengoynes expression with the same name. 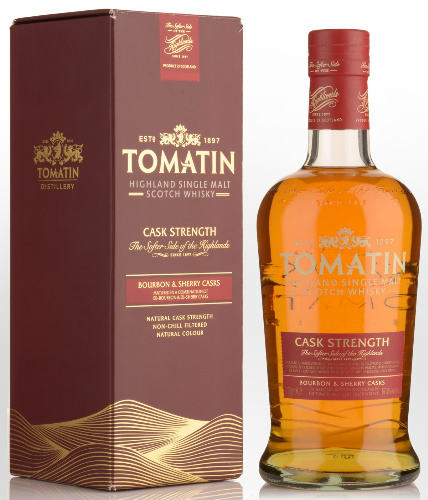 Nose: Lots of barley and funky Sherry. Lots of cereal notes as well, but also a hint of smoke and cask toast (the former probably coming from the latter only). I can’t say this smells very appetizing and nice from the start, but the Glengoyne got better with extended breathing, so we’ll give this one some time as well, but I can already tell you that this Tomatin won’t take as long as the Glengoyne. There are also buttery and creamy elements and some hidden fruits. Sugar water and hints of licorice, clear glue and some sweet fruits. Pencil shavings, paper, cardboard and a slightly odd (or off) acidic note. Not much, but it’s there. Just not of the tropical kind Tomatin is known for…or is it, considering the evolution with air. Just like the Glengoyne version, It shows its youth and both show a somewhat similar young and strong style, based on both Bourbon and Sherry casks.

Taste: Yeah, strong at first but next, heaps of wonderful tropical fruitiness with nice nuts! It’s definitely a Tomatin all right. Sweet on entry. Toffee, caramel. Butter. immediately followed by some nice oaky notes. Not as strong as the number suggests, and also not hot. Pretty easy to drink, if you have some cask strength experience, that is. Cookie dough and cream, with just enough sweetness to present the finish which is definitely a bit drier. Just like the Glengoyne the taste is better than the nose is. Lacks a bit of complexity though, but in the taste it doesn’t remind me of a young Whisky. Whiffs of old style Whisky pass by as well.

The youthful cereal notes? I don’t like them. It’s that part of Whisky that transforms into something way better with some proper ageing in proper casks. When freshly opened these notes are pretty upfront, in your face. A bit off-putting in my opinion, but the same happened with the Glengoyne Cask Strength as well. Sure it wears off, but do you really want to wait some time after pouring it, before you can thoroughly enjoy it? Because you can, if you work at it a bit. After extensive breathing both become nice cask strength drams worth your money. The quality is there and therefore the score is up there well into the eighties. But for me, this is also proof why Whisky should be aged properly and why I’m also a bit hesitant when it comes to NAS-expressions, which most definitely are not all bad, just look at the WIP Kilkerrans to name but one. Luckily this one tastes so good, I have no problems forgiving it for the funky nose. Again one you have to let breathe for a while.