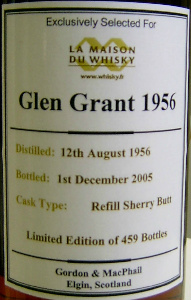 just had to write another one about Glen Grant. Do I really have to revert to Gordon & MacPhail to find me a good Glen Grant? There are a lot of great Glen Grants around, but are they bottles of the past maybe? Here I have another Glen Grant that as it turns out ís from Gordon & MacPhail. Will it be good or do Gordon & MacPhail also have some mediocre casks? This one is bottled for La Maison du Whisky who usually pick good casks, so no need to worry, this probably will turn out all right. Besides, this is no 70’s Glen Grant, but a 1956. The year Alfred Hitchcock became American and made “The man who knew too much”.

Nose: Wow, this I like. This is the old sherry, with tar, licorice, clay and coal nose that I like so much! It’s farmy (which is not elegant) and has elegant wood. Spicy and winey-sweet. Dark fruits lemonade all over this. Raisins in the finish after leaving it to breathe a little. It’s a nose like this that make me live up to my blues-name: Fat Killer Jenkins, because I wouldn’t mind having a few cases of whisky that smell like this.

Taste: Very balanced because it’s the nose in diluted form. Sherry, tar and asphalt, Black fruits with a lot of wood and a hint of cardboard. Luckily the main character is so powerful, that it is capable of masking a lot of the wood. You just know it’s there on your tongue and you’ll notice it in the finish. But then again, it’s so old, that it should be there and it fits the profile. It has a lot of wood but it doesn’t make the finish overly bitter nor harsh. Not overly complex though, like a nice old cognac.

Glen Grant if you want a good one. Well as I said there are a lot of other good Glen Grants around. We’ll have to keep searchin’ to find us one, but for the time being we’ll have this Gordon & MacPhail 1956, and that’s no punishment! The nose is to die for, that alone is worth almost a 100 points. But the whole I will score…

There is also a second one for LMdW. Also a 1956/2005, only this one is from a First Fill Sherry Hogshead that yielded 105 bottles.

Many thanks also go to Christian Lauper of World of Whisky who sent me the picture of the back-label. As far as I know, this shop is the only one in Europe who still has this bottle on stock (CHF 509.00).