After the Moka Intense, why not try another Rum while we’re at it. Lance was nudging me in the ribs for quite some time and I started to feel a bit sore and guilty actually for letting him down for so long! Yesureebob! This time I’m going to have a look at a bottle of Rum I bought when visiting the U.K. a few years back. When visiting one of my favorite retailers, I found three different Kill Devil Jamaican Rums. Kill Devil is the Rum brand of Hunter Laing, best known as an Independent Whisky bottler. Maybe Old Malt Cask rings a bell? For reasons I really can’t remember now, I chose this one to be the first of the three to open.

Monymusk, for Whisky-people at least, maybe known as a Scottish village. It isn’t even a Jamaican distillery. Monymusk in fact, is the sugar factory next to the big and modern Clarendon Distillery and name giver to this “brand” of Rum. So Monymusk is made at the Clarendon distillery, which is owned by NRJ (National Rums of Jamaica) and Diageo (for Captain Morgan). NRJ itself, is owned by the National Sugar Company (Jamaican Government), Maison Ferrand (of Plantation Rum fame) and Demerara Distillers Limited (we know for El Dorado Rums). What a partnership! Imagine being invited to a party thrown by these people! I imagine a very sweaty Caribbean night indeed. By the way, NRJ also owns the Long Pond distillery and the now defunct Innswood distillery, which is now used for aging casks. After WWII (in 1949 to be exact), Clarendon was built with Pot Stills and much later (somewhere around 2009) the modern addition was made, housing Column Stills. Since our Monymusk was distilled in 2003, we know which stills “did it”… 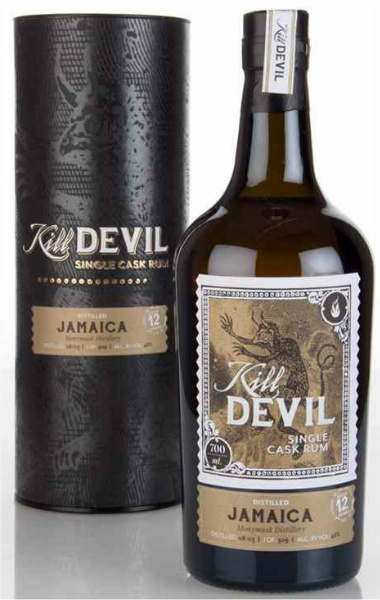 Nose: Ahhh, Jamaican Funk, with dust and vanilla powder, yet also extremely fresh. Big and grassy. Mocha and milk chocolate. Old leather. Almonds and a lemon and lime peel note in the back, maybe even some orange peel, but to a lesser extent. Whiffs of gun-powder occasionally fly past, as well as a different burnt note, more like well roasted meat, roasted (not burnt) to a crisp. More almonds and ear wax. What I quite like is the citrus combined with the thick Jamaican funk, well maybe not that thick, not very thick at all actually. This is more like funk light. Jamaican funkette. Its there but balanced out by a fresh beach/sea note and obviously the citrussy aromas which combine very nicely. Some nice soft wood washes ashore (along with some paper). A light Monymusk, but quite balanced and appealing. Easy going and all is well integrated. Don’t confuse lightness with reduction to 46% ABV. Even cask strength Rums can be light, and this Monymusk surely was probably light in its cask strength form as well.

Taste: Waxy and funky. Short sweetish and nutty burst that washes down quickly. Paper and cardboard followed by a sweet honeyed note and some licorice, finishing the first sip off with a medium pepper attack. Warming. Second time around, more wood is showing and the paper/cardboard note returns as well. More bitter this time, bitterness from wood and again this ear wax aroma. Green and spicy and also a bit minty. Laurel licorice, that’s it! Given more time, some sweeter notes do appear. Sweetish cold black tea with more almonds and dried out yellow fruits. Dry pineapple comes to mind. Since there isn’t actually that much wood (apart from the bitter notes), I’m guessing this wasn’t a very active cask otherwise. Light color and the weak finish also tell some tales. After a while some medium bitter, waxy and sometimes even industrial notes appear, which takes away from the balance a bit. After some breathing, it’s also dryer than expected. The Jamaican funkette seems to have taken a back seat, or maybe found it’s way all back into the boot/trunk (or the trailer for that matter). Not a long finish actually, similar in lightness, to the Cadenhead Epris I reviewed earlier (only in lightness mind you, the similarity ends there). Light aftertaste, but not much at all. Although the laurel licorice seems to have some staying power.

Although not the world’s most powerful Monymusk, it has good drinkability. Definitely a better nose than taste. The body falls down a bit, and it is also a bit weak in the finish and aftertaste. The nose was better balanced as well, but hey, no real off-notes. It is a decent Jamaican Rum, but also nothing more than that. There are many better offerings of Monymusk to be found, and if you already bought this, you’ll have no problem finishing it. I haven’t. Yes, quite light in style, which is OK and reduced in ABV as well, which maybe somewhat less OK to be honest. I wonder how this was at cask strength although you really can’t make up for quality that way, but I’m sure in this case it would surely have helped a bit.

Clarendon can make a lot of different marks, from light to very, very, very heavy (lots and lots of esters), so from such an uninformative label as Kill Devil has, you never know what you’re gonna get. You don’t say, Forest! Its Jamaican and its Monymusk, but that’s about it. Excellent introduction to the Jamaican Rum-style if you’re a novice, although I do wonder if a novice would go for a Kill Devil bottle to boot or any other independent bottler? I don’t know. Entry-level it is not, but definitely second tier. Maybe Hunter Laing (and the others) should not reduce Rums at all, we well experienced (Rum) drinkers and anoraks are willing to pay more for a cask strength Rum. Yes we do, don’t we Lance?

Renegade Rum Company. What might that be? If you are familiar with Single Malt Whiskies, then the name Bruichladdich should mean something to you. In fact it will mean the world, since it is one of the famous Whiskies from the Isle of Islay. Home of the best peated Whiskies in the world, only historically, Bruichladdich is more famous for its unpeated Whiskies than for their peated Whiskies. To put an end to that, master distiller Jim McEwan started to make Port Charlotte, a heavily peated Single Malt Whisky (around 40 ppm phenols) and the astronomically peated Octomore (up to 258 ppm, which is a lot more than 40 ppm). There is no normal way to peat Whisky that high, so in comes the skill of Jim. Bruichladdich is also the home of The Botanist Gin, made up with botanicals from Islay, and also of Renegade Rum. Jim supposedly hand-picked casks of Rum and hand-picked Wine casks to finish those Rums in. Expect relatively young Rums, all finished in some sort of Wine cask. All reduced to 46% ABV, in my book better than the usual 40% ABV. Anything below 40% I don’t even consider buying if I have to be honest. In everything Jim does he pushes the envelope, so prepare yourself, as will I, for an unusual Rum experience…

Nose: Yep, funky Jamaican style. I love the high ester quality it has to it. Easy to recognize. Fresh cookie dough. Extremely creamy. Already the promise of a cloying syrupy Rum. Wait a minute… A drier note emerges. Old raisins and some wood. There is a note here I struggled for a while to identify, so common, but what is it? Its Grappa! The Temperanillo cask infused a Grappa note to this Rum. Grassy, hay-like. Clay, butter candy and a more vegetal note. If you have ever sticked your nose in the hole of an empty Red Wine cask, you’ll recognize its strong spicy notes in this Rum as well. Nice and quite unusual for a Rum. Amazing how the finish is taking over the Rum when you let it breathe for a while. When nosing this the high ester Jamaican smell is retreating quickly (move it around a bit so it gets some more air, and it briefly returns). With the Grappa nota also a more nutty aroma emerges as well as some warm butter. So it starts big, funky and creamy but after a while it has this well-balanced dryness combined with a nice warm butter note. This is the most two-faced Rum I have smelled untill now. A bit unusual, but I like it. Pushing the envelope a bit. If you love Grappa, you’ll love this nose.

Taste: Here the funky part is even shorter. Upon entering your mouth, for a brief moment, you think you are drinking a typical and clean and simple example of a Jamaican Rum, but it turns around rather quickly. Lots of wood and heaps of acidic woody notes followed by strange red fruit acidity from stale Wine. It doesn’t have the taste of wood itself though. It also lacks the bitterness of clean wood. No, its different. What it also lacks is the Grappa I found on the nose, for some that is a good thing, but it also makes for a somewhat unbalanced Rum. Well it’s not really a Rum either, especially a Jamaican Rum. What it does have is some nice exotic spices, dare I say Indian again? Also slightly soapy and floral, and it has some notes of Foursquare as well, which is a Rum, although not Jamaican. A long time after swallowing, a very discrepant winey, acidic and fruity note re-appears, combined with toasted cask, well hidden into the background. Can’t really say that the finish is well-balanced. It’s like a race where all the competitors cross the finish well apart from each other, running different distances as well. So unbalanced it is, and definitely the weakest part of the whole experience.

This bottle is clearly an experiment. Where for me it works wonders on the nose, it doesn’t actually work that well when tasting it. Somehow the finish overpowers the young Jamaican Rum. Maybe this experiment would have worked better if the Jamaican Rum was older, bigger, more of a match to the Tempranillo?

So there it is. I love Jamaican Rum to death, I love Jim McEwan and I love a good experiment, and that is what experiments are for. You try something that is usually out-of-the-box. It might work or not. Here it clearly works on the nose, but less so on the taste. So not the best of Rums around, and the score will reflect that, but because of its out-of-the-box-ness I still would buy one, although many of the Renegades are sold out by now…