Havana Club is the story of José Arechabala y Aldama (Don José). In 1862 the 15yo José moved from Spain to Cuba, and in 1878 he founded the La Vizcaya Rum company in Cárdenas. He changed the name of the company to his own in 1921 and left his son-in-law José Arechabala y Sainz to run the company. In 1923 José passed away and the second José was killed just a year later by kidnappers. Gabriel Malet y Rodriguez took over, but he died already in 1926 to be succeded by Don José’s nephew José Fermín Iturrioz y Llaguno (Josechu). Under Josechu, the Havana Club brand came to be in 1934. Like so many businesses the company was nationalized on the first of january 1960, and the family moved back to Spain and the US. After nationalization, the government changed the name of the distillery into Havana Club. The Cuban government started selling Havana Club Rum in 1972 in Eastern Europe. In 1977 a new factory went into production in Santa Cruz del Norte and a second factory was opened in 2007 in San José. In 1993 the Cuban government signed a deal with Pernod Ricard, where the latter would take upon itself to “sell” Havana Club to the consumer all over the world except for the US, because Bacardi already sells a brand of Rum called Havana Club (made in Puerto Rico) in the US since 1994, after buying the name and recipe from the Arechabala family. Pernod Ricard and Bacardi, both Giants in the drinks business, are fighting over the brand and its use in the US in court ever since… 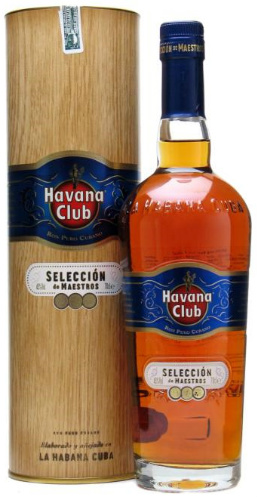 Nose: Just like the Cubay 10yo, this is full on aroma. Again a Rum that jumps at you from the glass, so don’t pour yourself too much at once. Somewhat less creamy and soft, but sharper and seems to have a more pronounced wood nose. A treat to nose, well-balanced but again not the most complex stuff in the world. It’s probably just the Cuban style I guess. Hints of mocha, milk chocolate and hazelnuts. Wood becomes more and more dominant. Pencil shavings and fresh succulent oak, but also a sharp dry oaky smell which transgressed into a more paper and dry leafy note. So lots of oak in the nose. Raw in a good way.

Taste: Yup oak again, but only for a short while. The sweet constituents are quick to take over. Sugar water, and creamy toffee. Quite warming and good length. This has some serious staying power for a Cuban Rum, which is supposed to be light. Quite creamy and some caramel, in a way I like my Havana Cigars. Compared tot the Cubay 10yo, this has 5% more ABV and it shows. Good length and good delivery. Fruity black tea. Overall this isn’t a very complex Rum, but it does have something of a bite and again is very drinkable and loveable. Wood. The pencil shavings from the nose stays behind for the aftertaste.

Definitely in the same style as the Cubay 10yo, but for me it even has more simplicity, which in this case is not necessarily a bad thing. Remember the Cubay has something I liked and couldn’t put my finger on? Well I still haven’t found out what it is, but this Havana Club I like as well. Overall quite nice and drinkable. I love the slightly higher ABV. On the other hand, it’s also a bit raw, good raw, and lacks a bit of complexity and development, which in this case I don’t mind. A bit young, and definitely a lot of fresh oak, but for me this one surpasses the Cubay 10yo in balance. Nice and tasty stuff but maybe a wee bit too expensive.