Not too long ago when thinking about Whisky, Skye was Talisker, and Talisker was Skye. Not any more, since a second Distillery came about on the island. Production at Torabhaig started in January 2017 and this particular bottling contains Whisky from the opening year as well as from 2018. The back label is a treasure trove for info: Barleys used for this bottling are Concerto and Laureate. Yeasts used are Pinnacle MG+ and Safspirit M-1. For me a first. I have never seen the yeast being mentioned, nor do I possess any knowledge about yeast strains that are used today. So useful info I’m sure, just not right now. The in-grain phenol content was 77 ppm, off the still, it was around 60 ppm, with a residual peating level of around 17 ppm, so this is then a heavily peated Malt. The Whisky underwent no chill filtration, nor was it coloured. Before the Allt Gleann came the 2017 vintage in the Legacy series, which was also bottled @ 46% ABV. The difference between the two probably the usage of 2018 spirit in the Allt Gleann, and by now there is also a second release of Allt Gleann called Batch 002. 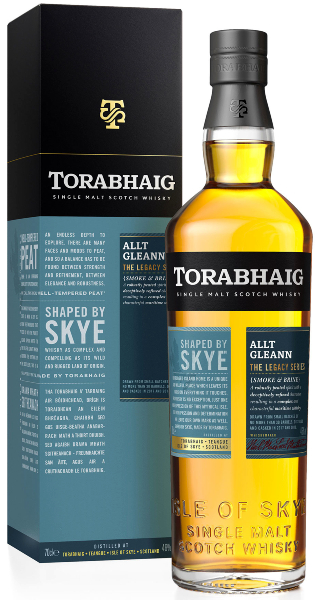 Nose: Modern, soft with slightly sweet peat. Very clean, including a breath of fresh air, maybe even slightly Menthos-like minty. Salty smoke (this makes my lips go dry, only by smelling it), tobacco, dust and soft wood (not virgin, yet slightly creamy and vanilla-like). Quite mature actually for such a young Whisky. Nice spicy and green notes. Slightly perfumy. Nicely peated, yet not over the top. Black tea with a slight leather note as well. Distant fruitiness and the smell of baking cookies, an ashtray and cold roasted pork. This is much better smelling than I thought it would be, well made stuff. The smell gets somewhat softer and more malty (and sweeter) after extensive breathing. If this tastes anything like it smells, we have a winner on our hands. Even the Lagavulin 12yo, I recently reviewed, showed more hints towards new make than this. Quite amazing. I only hope the reduction to 46% ABV didn’t harm it in any way.

Taste: Aiii, right from the beginning rather thin. Tastes oily and fatty, but doesn’t have the matching texture. Nice soft peat, wood and some liquid smoke and yes, quite sweet and fruity. Yellow fruits with lots of unforeseen licorice notes. Thin it is yet balanced and tasty. Quite strange and unexpected since the nose is quite big and aromatic. Elements of crushed beetle and maybe some lemonade or cola mixed in with the smoke and the peat. Less salty than the nose predicted. No new make in the taste as well. Not entirely Islay in its approach, but not far from it either. Good stuff, I hope for a bright future for Torabhaig.

I think this is already amazing stuff for a Whisky of three to four years old and definitely better than I though it would be. The quality is there, even at this reduced ABV. I’d like to try a similar product of Torabhaig at cask strength, that should be nice!.

Thanks go out to Auke for his sample.