Glen Grant came to life in 1840, and is being famous for being the first distillery with electric lights! (in 1861 already). But after that it’s very quiet. Apart from distilling not much happening here. In 1961 a descendant of the original founder made a deal with Armando Giovinetti which made Glen Grant the most sold Single Malt in Italy and as far as I know that maybe even true today. Half of what Glen Grant makes went to Italy. Since 2006 Campari is the owner of Glen Grant, so its even became Italian! The Italians love their whiskies young and the Glen Grant 5yo seems to be very popular over there, together with a version without an age statement. 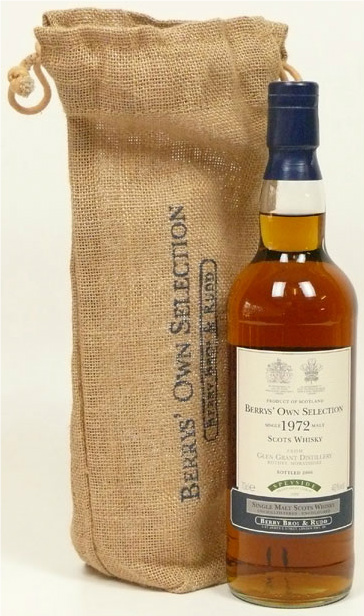 Nose: At first fresh and sea like, but that quickly transforms into wax, wood and spice. A dab of dried yellow fruits, but not much. Definitively a 70’s nose, a bit like Caperdonichs from 1972. Probably no coincidence that Caperdonich was founded as Glen Grant 2. Altogether dryer and more cold tea like. Yep, more spicy and some light mocha and raisins. Also a slightly floral and perfumy side to it (and some tar). So after some time in the glass, it distances itself from the typical Caperdonich nose.

Taste: Initially full-bodied, spicy yet not overly woody. Some wax and ash, but that’s also gone very soon. Also some distant tar and a little bit of coal. Yeah that’s the stuff you get from an old malt. Some sourness from the oak. You wouldn’t have said that it was reduced. In the middle and in the finish though, it ís a bit thin, and reducing probably wasn’t a good idea. The wood comes very late and is the main part of the finish.

It’s a decent Glen Grant, but nothing stellar. When I come to think of it I don’t even think its very balanced. I see this going for up to 250 Euro’s at Whiskyauction, and I can think of hundreds of other bottles for that kind of cash, that would outperform this Glen Grant. A nice piece of history from the seventies, but nothing more.