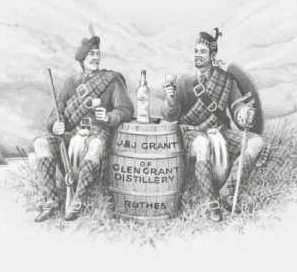 I did some rummaging in my boxes with samples and found another Glen Grant. Well I actually found several of them, but I just chose this one. You know Glen Grant, the place that was the first distillery that was illuminated without burning fuel by themselves. This time we have a Glen Grant bottled in the Old Malt Cask series by Douglas Laing. Again in the new tall bottle, just like the Glenfarclas and the Port Ellen reviewed earlier. We know that there are some stellar Glen Grants issued by Gordon & MacPhail. Yesterday we had a Berry Brothers & Rudd version from 1972 that didn’t impress me very much, lets see if Douglas Laing bottled a better Glen Grant. This time from 1975. 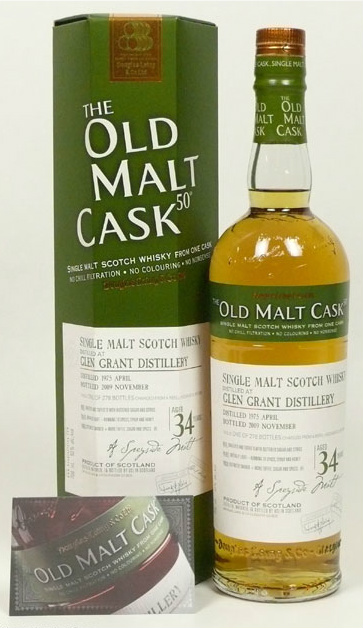 Nose: This is sweet and fruity, apples and warm apple sauce, a profile that suits 70’s Glen Grants and Caperdonich’s. The next whiff was less balanced and shows some mustiness. Almost herbal, as in herbs that were in water too long. It still smells sweet and musty with some hints of cigarette smoke. Seems strange but isn’t bad. Another very strange smell that reminds me of the acid and estery smell of crushed beetles (not Beatles, have you never stepped on a beetle, when you were a kid?). There was definitively something wrong when distilling this, drunken maltman maybe? After some time some spicy wood comes through the sweet and sour sauce and even later hot butter. All in all it’s not thát horrible as it may read. But on the nose definitively not one of their best casks.

Taste: Sweet and sour again and little wood and ash. Very strange sensation in the back of my mouth when swallowing. Minty apple gravy? (if that makes sense?). It an experience this malt is (Yoda intended). It starts thin and volatile when this enters my mouth, and quickly becomes ‘thicker’, with an attack like pepper from Talisker, and turns into pineapple! The finish picks the wood up again, combines it with spice (pepper), almonds and a kind of sour bitterness from the wood itself.

This is one to remember, and is right behind the Signatory Teaninich that seemed to be carbonated.

A Glen Grant that is obviously flawed and seems much younger than it actually is, but the strange bits were indeed an experience, I wouldn’t want to miss. Luckily though, I bought only a 3 cl sample of this, because a whole bottle wouldn’t be funny…