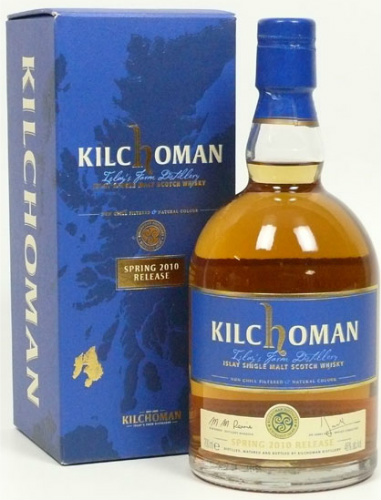 Kilchoman then. The newest addition to the immensely popular Islay Whisky family. This new small farm distillery was built in 2004 near Kilchoman in the west of Islay, and therefore named Kilchoman. Operations started in 2005 and their first disaster struck in 2005 also. No distillery can call themselves a real Scottish distillery without a big fire. Well history was in the making so let’s do the fire thing quickly, they might have thought. Not hinting at any foul play of course. In 2005 the kiln burned down. Rebuild in 2006 and operations recommenced. As of 2009 but foremost 2010, Whisky started to be released. In 2009 the first release in the new core range was the “Inaugural Release”. Next up was “Autumn 2009” Let’s try our “Spring 2010” that was the third release.

Taste: Licorice, black and white powder. Chewy, Sherried yet clean. Half sweet. Strange enough it also has something “thin”, maybe the ABV seems low (although it is 46% ABV). Again a little hint of soap, but nothing disturbing. Having tasted Bourbon only Kilchoman’s, the soapy element is probably from the Oloroso Butt.

Fair is fair. The Oloroso finish does add some character to the whole. I know the Barrels they source from Buffalo Trace are very good. I don’t know where Kilchoman sources the Sherry Butts and if they are American or European oak. Good spirit and good casks and look at this 3yo Whisky, reduced to 46% and already very nice. Can’t wait to see Kilchoman age!