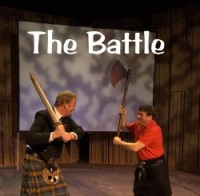 In this day and age of battles, battles for oil, battles in politics, and even dance battles, now there are also battles in Whisky. The guys in the picture are Jan Beek (right) and Dennis Mulder (left). They do tastings/battles to see who bottles the best Whisky, the distilleries themselves or the Independent bottlers. Jan represents the independent bottlers and Dennis the official bottlers. Time for my own battle. Well not a battle with axes and swords. Earlier I reviewed an official Highland Park 12yo and scored it a decent 85 points. Here we have a this independent 12yo Highland Park, bottled by Gordon & MacPhail and selected by Van Wees, so mostly sold in the low counties. Let’s see if this Gordon & MacPhail 12yo can beat the official 12yo, and score more than 85 points…

Nose: Extremely sweet, spirity, spicy and woody. Raisins, lots of raisins. This smells exactly like a PX-Sherry. Apart from the thickness of it all, it does smell dryer later on because of the wood and spice. Gravy and meaty, something that fits the Sherry profile too. Definitely some honey and heather in the nose. Which surprises me since the Sherry cask might be very overpowering. Tar and sulphur come late into the mix. I love the coal and tarryness of sherried single cask Highland Parks. Burnt wood. Bonfire from a distance at night. The opposite of elegant I would say. The longer it breathes in the glass the better this gets. It reminds me of some of the better early seventies good sherried Whiskies.

Taste: This is sweet PX-Whisky with a bite. It starts out sweet and quickly turns into spicy wood. Syrupy sweet. But the initial sweetness terns into dryness because of the woody attack. Again coal, tar and even some licorice. Fireworks and a cold freshly half burnt log. Demerara Rum with a lot of smoke. It’s sweet but not quite honeyed. And no heather to be tasted too. Some dark chocolate and cola. Do I really taste a hint of soap?

OK, it’s a 12yo Highland Park all right, but this version has nothing to do with the official 12yo of today or any day for that matter. It’s a beast, but a lovely beast. If you can handle heavy Sherry, than this is one for you (and me). In the end I like this one better than the official 12yo, so this battle is won by Jan Beeks axe. But the whiskies are completely different and both have their moments. One is elegant and light(er), the other a beautiful beast at high strength. Still, I like the older official bottlings of Highland Park.