Amrut (अमृत) means something in between elixir of life and nectar of the gods. Amrut Single Malt Whisky is made by Amrut Distilleries which was founded in 1948, but just as with Paul John, it took them some time (untill 2004) to release their first Single Malt Whisky,

with that, they were the first indian distillery to do so. In 2004 Amrut released its first Single Malt Whisky in Glasgow Scotland, (in the lion’s den you might say). Today and that isn’t even a decade later, Amrut already released a lot of different Single Malt Whiskies. Peated and non-peated, matured in Bourbon, Sherry, Brandy, Cognac, Port and all sorts of different casks. Amrut have even released in one bottle, Whisky matured in India and in Europe, or using malts from different continents. Lots of thinking out-of-the-box. 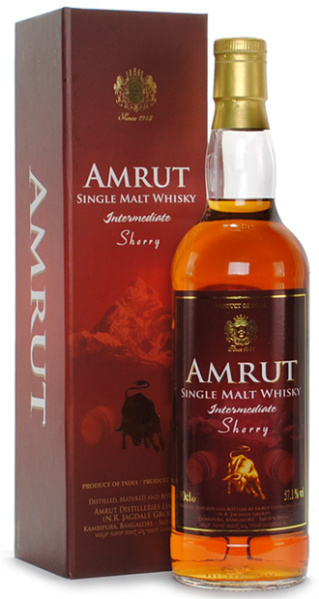 Nose: Sweet, buttery and creamy at first. Hints of malt and yoghurt. Even smaller hints of licorice and tar. Big bold fruity Whisky. Extremely likeable nose. I’m guessing this particular Sherry cask did some good work. But there is more, it also has a flowery element mixed in with the vanilla. Quite sweet and has a little smoky bite. Nice and complex, well balanced nose. Sometimes vegetal and smells of a little piece of lit cedar (to light a cigar with). Pencil shavings. The floral part gives of whiffs of floral soap, which adds to the complexity without making the Whisky soapy. The nose gives away the Indian origin.

Taste: Sweet, sherried, fruity and has a bite given by the high ABV, but I still won’t water this down, far too nice already. Fruity and cookie dough. The sweetness dissipates and gets more drying towards the oak. Sherried and toffee. Cask toast. Good long fruity finish, with a slight hint of bitter wood, which fits perfectly to the initial sweetness this Whisky has. A little bit less balanced, so it could have been even better than it already is!

Again a perfect example of the level the Indians got to. The Paul John Edited is already a great Whisky, and shows how a relative newcomer can make good Whisky. So I’m guessing the still is a lot of room for improvement there. Amrut is at it for a longer time, but as a Single Malt Whisky producer not even 10 years. Amrut are showing with this Sherried Intermediate that they already are giving a lot of Scottish Whiskies a run for their money. I consider this one is a must buy, I already secured myself a bottle. Great Whisky. I’m expecting great things from this distillery (as well as from John Paul). Way to go India!

Thanks Ashok Chokalingham for the sample, unfortunately I only had one sample bottle with me…