Yes it’s time for peat! After the introduction to Bowmore by Bowmore themselves: The 12yo and the 14yo by indie bottlers Cadenhead, it is now time to pump up the volume! Here we have a 10yo by Bowmore themselves again, but this time with an ABV of 55.3%. This Bowmore Tempest was introduced in 2009 in their small batch range, that by now has seen four releases (one annually) of this Tempest made from First Fill Bourbon Cask that were laid down at the Vaults No.1, you know the warehouse were the waves are beating on the walls! Since there now are four releases of the Tempest, this first batch has become something of a cult Whisky, but not as “culty” as another recent small batch release by Bowmore: ‘The Devil’s Casks’, another 10yo, but this time matured in First Fill Sherry Casks (Oloroso Butts). 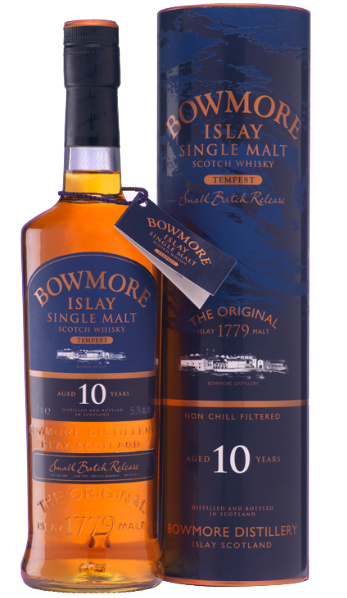 Nose: Clean, woody profile. Cigarette smoke. Beautiful integrated cask toast. Quality and powerful stuff. As with the first two Bowmores from this Bowmore Week a slightly perfumy profile without the much feared FWP. But wait, there’s a lot more happening here. Custard, vanilla and crème brûlée (as stated on the back label). A small hint of warm tar and even later ashes. All this take over the initial sharpness of the dry oak and cigarette smoke.

Taste: Very sweet, ice-cream vanilla and again a wee bit of pepper and a great creamy, vanilla, crème brûlée finish. Small hints of (toasted) wood. This has a full and round body. Very nice Tempest indeed. It does fit the profile I “get” from the Cadenheads Small Batch 14yo, I reviewed yesterday though, so I think I understand where the Bourbon Bowmores are going these days. Nice stuff, likeable, easy and not too complex. Fruits, candied fruits. Apricots with vanilla yoghurt. Sour wood and a peppery finish.

This first batch became somewhat of a cult whisky. It’s really good. and therefore the 12.000 bottles are pretty much sold out. To this day four batches of this exist.

This looks like an annual thing. Since this is released in batches I really don’t understand the need for coloring, especially when all batches differ a bit in color, but still I believe all are colored. Bowmore is picking itself up. It surpassed the FWP-problem. Got the wonderful Rachel Barrie, who I believe is doing a great job at Bowmore (and some other distilleries).