After the Irish Teeling Blend and the Old Malt Cask Clynelish, why not make it a trio and try this new release from Benriach, wich was also finished in Rum casks. Out of the closet it came and onto my lectern, where I popped the cork of this Benriach “Dunder”. Dunder is the name of the residue left behind in the still after distilling Rum in Jamaica. The Dark Rum finish was done in casks that once held Jamaican Rum. I love Jamaican Rum, so I’m very interested what the Rum casks did for this peated Whisky! Yes you’ve read this right, peated Benriach, finished in dark Rum.

This is the second release in Benriachs new series called “Limited Production”. The first release was another peated 18yo, finished in PX casks, which was called “Albariza”. 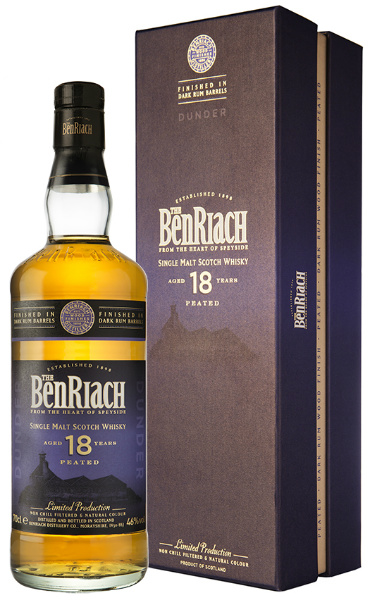 Nose: Nicely vegetal, soft and peat, reminding me of black coal. Niiiiice. Good peat. Lots of depth and quite juicy. Smoke, earthy and full of spices. Meaty smoke and a minty/menthol note. Not a lot of Dark Rum is noticeable though. The peat is simply the main marker here. If anything, the Rum brings balance to the nose. The peat aroma is quite strong without being hit in the face with it. Its strong and laid back at the same time. Balanced. Behind the peat is a sweeter, more creamy note that acts as a vehicle for the peat. Big peat, small vehicle. Like an elephant on the roof of a mini (the original mini, not the BMW giant mini). This needs a lot of air, and I just opened the bottle. This will get better over time. Over time the peat retreats a bit, letting through more smoke and a more buttery, creamy smell as well as some fruity acidity. Citrus (but not the skins). This is getting better and better (but still no high ester Jamaican dark Rum).

Taste: Estery sweetness, thick, you can cut it with a knife, but it’s not as sweet as those sugary Rums, since the overall taste is pretty dry and smoky. Spicy. Hints of paper. Lots of smoke, licorice and a not completely integrated acidity (like drops of lemon juice on fresh butter). All of this is combined with hints of banana. Intriguing. Extremely well-balanced. Warming. The right amount of time was used for finishing this, although it may have benefitted from a little bit more Jamaican Rum (and sweetness) in the mix. Maybe it should have aged a little while longer. Vanilla and Demerara sugar are present, still not very sweet. The Rum does show itself, especially in the finish, without it being typically Jamaican, apart from the high ester entry mentioned above. Hints of red berries with vanilla and smoked almonds (without the salt). What a nice surprise this is.