Earlier I reviewed the Bruichladdich 10yo. That was one from the first batches to be released, right after the distillery was sold to Mark Reinier & Co. The first releases were that 10yo, the 15yo I’m about to review and a 20yo. Ten years ago that is how a standard range looked. Age was everything back then. Today we’re not that far removed from an age, where age statements seem to be only for people with Lamborghini’s. Real ones, and I don’t mean the tractors too. It’s all about demand people. The 10yo I mentioned before didn’t float my boat, so I’m not sure what to expect with this 15yo. Let’s have a go shall we? 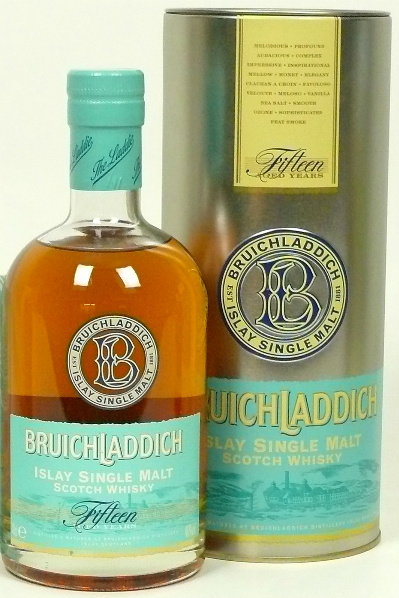 Nose: Reminds me of the 2003 10yo with just some more of everything, in fact, this one doesn’t want to stay in your glass! Fresh citrussy barley. Hint of peat and a little bit of smoke. Smells quite sweet for such a Malt. Garden bonfire. The sweetness is fatty and oily, or you can call these aroma’s well-integrated.  The more I smell this, and the more air it gets, the better it becomes. By now it’s already way better than it’s 10yo brother (or sister). Nice succulent wood, again integrated with the sweetness. Hints of vanilla, not much, and fresh, some distant fruitiness. I spoke too soon. The vanilla part grows bigger with more air and becomes creamy. Sweet yoghurt with peach. Lovely. Great balance and quite appetizing. I hope it tastes as good.

Taste: Quite sweet and very creamy with a woody, bitter edge to it. Again the sweet yoghurt with peach and toffee. Reminds me a bit of the great Bourbon casked Whiskies from the seventies. Great entry and a similarly great body. Not a lot of development though, but with something that tastes this great, who cares? Towards the end of the body the slightly peated toffee sweetness takes a step back and lets the wood through. It’s there, without taking over, barely though. You felt it coming: “but”. The flaw is in the finish. It breaks down a bit and is slightly shorter than the nose and the great body suggested. A wee bit too much reduced? Yes I know, its 46% ABV., but that doesn’t matter. This is how reduction with water, sometimes alters the finish. The aftertaste moves in to the territory of soap and stale beer and a minute amount of hops, but that sounds worse than it actually is, so don’t worry. Not a lot is left in the aftertaste, and there is only one remedy for that. Take another sip so it all starts all over again.