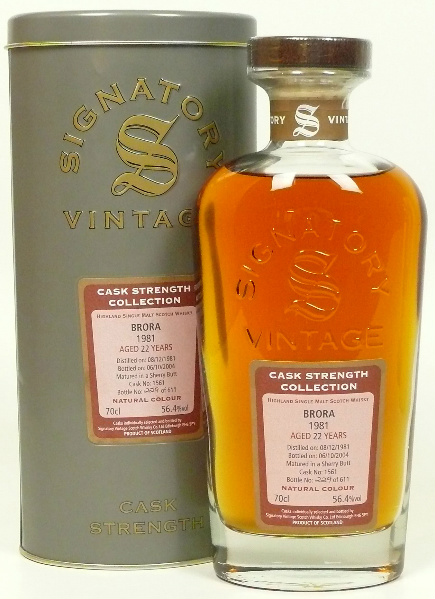 Nose: Fresh and vivid. Definitely Sherry, but in no way funky. Quickly a fresh creamy and toffee note develops and only a mere hint of peat, just inhale vigorously. Needs to breathe a bit. Nice soft woody note, which sometimes take a turn towards old paper turned yellow. A bit dusty as well, (with whiffs of white peach). In no way dry. Quite spicy. I tickles the nose, and again toffee mixed with wax. Chewy would be the word. Mild yellow fruit notes appear, adding some acidity and yet more freshness to the nose. It’s not typically peach, white or other, but some whiffs come across as peach in semi-sweet yoghurt. The wood stays soft and is part of the fruity and creamy mix, instead of giving it a spine. Its nice overall, and does develop al lot, where initially it didn’t seem very complex. Hardly any peat at all and just a splash of smoke.

Taste: Thick, waxy and fruity. Definitely a profile we get from fruity Speysiders from the seventies. Nice soft wood. Toffee, without being very sweet. It has some fruity sweetness, but just the right amount. It has more than 56% ABV, but it’s still friendly. Not hot, nor burning my throat. Very drinkable. To my amazement, a lot disappears towards the finish and the finish itself is medium at best. Only in the aftertaste it starts to come apart a bit, fading out. Just the right moment to take another sip.

This one isn’t about the peat and the smoke, and the ruggedness of highlands, and sea storms after which you need warming. This one is for those moment you need an old Speysider, Bourbon matured, with lots of fruit and wax. Remember this isn’t from a Bourbon cask, but is from a Sherry butt. It has hints of peat and smoke. It’s a bit like the profile Benromach is going for today with the new 10yo and 15yo.