Lets backup in time even some more. We stay in the land of the independent bottler, this time Signatory Vintage. We are going to take a look at another Highland Park matured in a Sherry cask, a butt even. This one is an even younger example at 9 years of age. The G&M/Whisky Mercenary bottling was 20yo, The Wilson & Morgan was around 14yo, and this Signatory Vintage bottling is a mere 9yo. Highly unusual back then, not so unusual today, since demand has risen dramatically. There is no time anymore to age the bulk of Whisky when there are so much of you around, dear readers. We’ll also go back in time bit since this was distilled in 1988. That is almost 30 years ago! 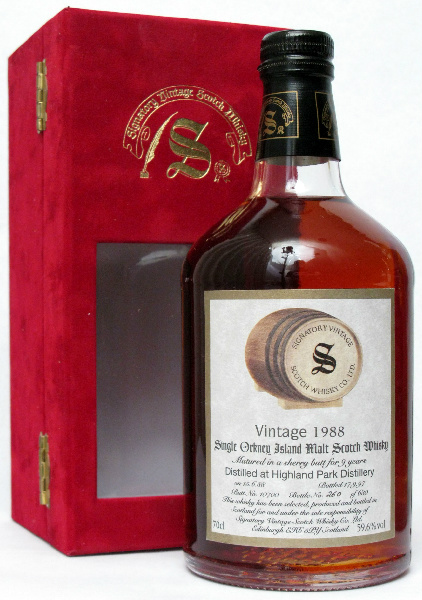 Nose: Funky Sherry, but this time with some quality behind it. Meaty and buttery as well, with some nice distant fruit going on. Dusty mocha and milk-chocolate. Dark chocolate as well. Steam, sowing-machine oil. Clean toilet notes, not to be mistaken by a freshly cleaned toilet odour. I know this sounds pretty peculiar, but I get it in this, so I couldn’t help myself and had to write it down. Deeper and more brooding. Probably Oloroso. Cedar wood with an oriental spice-mix and pencil shavings. Even though it is a young Whisky, it already smells like something from another era. Christmas spices. Christmas cake. Dusty and very thick. luxury and velvety, just like the box. The more it breathes the better is gets, give it lots of room for development. A much better Sherry cask than the one, the 1992 Wilson & Morgan expression matured in. After this, forget about that one.

Taste: Well this is almost 60% ABV and that shows. Its big, thick and a bit hot, but also very fruity (meaty blueberries), and amazingly pretty woody as well, but not too much. Luckily it also has some toffee sweetness to it, to balance it all out. Steam and coal. You are conned, by the initial sip, this is going to be sweet, but the sweetness is shoved aside by bullying tannins and Italian laurel licorice. I’m guessing this came from a first fill Oloroso butt, which impaired enough onto this Whisky, so it could be used as a very nice refill cask the second time around. Long oaky finish, with an even longer aftertaste full of black fruits and (cedar) wood. It isn’t all that complex, but when a Whisky is as tasty as this, it doesn’t need to be. It’s only 9yo, but it is bottled at the right time, believe me. Probably Oloroso, but Cream Sherry or PX might be possible as well.