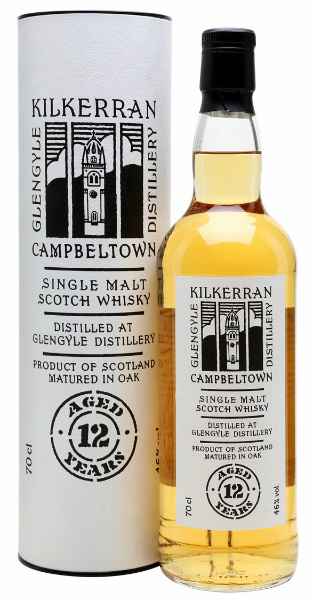 Nose: Definitely some autumn-like-peat happening here. Fatty, floral, green and lots of summery and fresh yellow fruits. Sweet and acidic. Nice waxy, slightly smoky, edge accompanied with nice wet and dry oaky aroma’s. All well-integrated (now). Kilkerran, just like most other Whiskies from the people of  Springbank, needs to breathe a lot. Freshly opened, I was quite disappointed with this one, lacking depth concentrating on all the wrong flavours and overall not very nice to drink, and that’s saying something, since I love the output from Campbeltown. At the time of writing my bottle is half-full (or half empty if you are a pessimist), and the change is remarkable. Coal and some tarry bits, unbelievable it got this well-balanced and downright delicious, after the more than poor start. Peaches and smoked pepper. Excellent stuff.

Taste: Sweet entry with yellow fruits in sweet yoghurt. White Peaches and old dried apricots. Smoke in the back of my mouth and again after extensive breathing so remarkably tight, big and balanced. All fits together quite well. A bit less complex than the nose was, but it makes up for this “simplicity” with big and luscious aroma’s. Green, and nutty (from the 30% matured in Sherry casks). Again a typical example of a bottle that won’t be around for long on my lectern. It’s not without its flaws, mind you. It hasn’t got the strongest finish. The finish is a bit thin, or seems thin after the big body, and falls apart a bit. Aftertaste reprises the big body with a creamy, vanilla feel to it.

So give it lots of time to breathe. Big from the start, big body, complex nose, a somewhat simpler taste with a medium to weak finish. Still nice and recommendable. I will most definitely pick up another 12yo after a few years to see what they’ve done with it, as well as other Kilkerran releases.