Bruichladdich, today, is known for their three brands of Whisky. The “unpeated” Bruichladdich, the heavily peated Port Charlotte (40 ppm), and the super heavily peated Octomore (80 ppm and higher). In november and december of 2007 Bruichladdich also made a heavily peated distillate at 50 ppm called Lochindaal. The Lochindaal spirit is named after a distillery. Lochindaal is one of the names, Rhinns was another, for a distillery we now know better as Port Charlotte, which started up in 1829 and closed in 1929. The Octomore spirit is also named after a distillery which operated between 1816 and eventually closed in 1854, Operations halted much earlier around 1840.

There were plans to reopen/rebuild the Lochindaal/Port Charlotte distillery and for this purpose in 2005, the Spirit and Wash stills from the Dumbarton complex, that once made Inverleven Whisky, were acquired. Dumbarton closed down. The Lomond Stills from Dumbarton (making a Single Malt called ‘Lomond”) are now used at Bruichladdich for The Botanist Gin. Lomond was mothballed in 1985 and Inverleven in 1991. In the end the whole Dumbarton complex was closed in 2002 and demolished in 2005 and subsequently the stills transferred to Bruichladdich. The Inverleven wash still was put outside the distillery on show, and the wash still was put in the Lochindaal/Port Charlotte distillery. Both stills never ran on Islay and were yet again transferred, this time to Ireland for the new Waterford Distillery, so I guess the reopening of Port Charlotte is put on ice for the time being.

Lochindaal was made available to the public, at the time, for £1850 a cask. The plan was to fill around a 100 casks a year and to keep making this distillate. Hardly any information can be found on that plan, so I have to ask around. By now we know that Lochindaal never really saw the light of day as a brand for themselves (yet), because in truth, what would it have added for the discerning Malt aficionado, or the public in general, when you already have Port Charlotte which is also a heavily peated Malt. Nevertheless, examples of Lochindaal, made in 2007, in 2009 (september) and 2010 (december) were bottled, and maybe more will be bottled in the future. So casks do exist, and maybe casks are still filled with the Lochindaal spirit. Most Lochindaal is bottled by independent bottlers or as private casks, by the people who bought the casks mentioned above. Be warned, since it seems to be quite rare, prepare to pay a little extra for a bottle of Lochindaal. 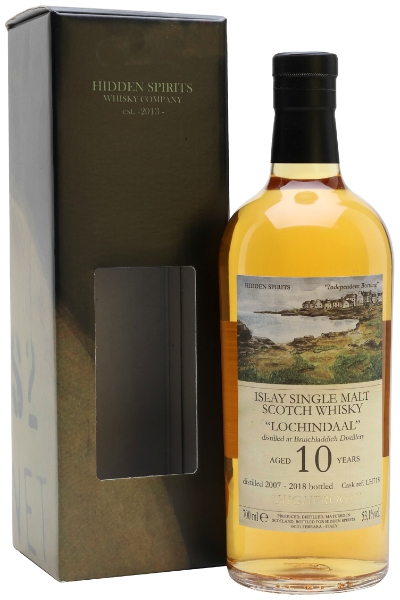 Color: Light gold, piccalilli yellow, when the sun hits it.

Nose: Creamy. Pudding, custard, warm butter and vanilla with smoke on top. Excellent. This creamy bit really reminds me of the Bruichladdich Islay Barley expressions. Like the 2007. I If you ask me it’s essentially a peated Bruichladdich (in style). Hints of soft black pepper and soft wood and mocha. Very appetizing. Fresh and somewhat fruity, but the creamy bit is where this Malt is all about. Give it some air and it develops even more, with an even more floral note. Salt and pepper come to mind on more than one occasion whilst nosing this. The oak, nice because it gives a backbone, shows itself quite late. The creamy bit is quite dominant. yet, if given even more time, still more is revealed, and the balance grows as well. more oak and paper notes. Spices adding depth. With even more time, a funky acidic note comes forth. Interesting. The peat is wonderful, soft and brooding and on top of that some fatty smoke to finish it off.

Taste: Fatty peat and stinging smoke. Big aroma. Black pepper attack like the best of Talisker. Peat lingers in my mouth. Warming and brooding upon a layer of toasted barley. Winter warmer this is. Almonds and ashtray aromas develop in my mouth. Hot motor oil, and a more winey note? All this accompanied by some lemon and lime freshness, zest and acidity. Big upon entry, but somewhat less big in the body-department. less creamy bits making for a slightly thinner experience, making room for the sharper smoky notes. However the pepper and the peat and the half-strength creamy backdrop do steal the show here. Long finish with an even longer aftertaste. It goes down like treacle!

I really like the 2007 Islay Barley Bruichladdich and I also liked the 10yo Port Charlotte and Octomore is nice as well. This Lochindaal is no exception. Easily recognizable as a product from this distillery. A rarity at 50 ppm. Well made but as I said, not terribly different from the rest of the output from this distillery. It’s very good, I really like this Lochindaal, but if you want to pay, or do you need to pay an elevated price for this and most other scarce expressions, is entirely up to you.