Whenever one walks in, there are always several Springbank’s on my lectern. I always have to be careful not to empty the bottle before the review has been written. Amazingly the last Springbank featured here is the 15yo bottled in 2018. The review was written in 2019, so no Springbank was reviewed in the whole shitty year that was 2020, how is that even possible? Never mind, here is the review of the Springbank 18yo bottled in 2011. One with the nice old black label that has already been replaced with the blingy and shiny purple label we still have at the time of writing. As said many times before, one of Springbank’s strong points is batch variation. No release of the 18yo is similar to any of the other releases, and this one is no exception. The 2011 never was considered to be one of the best, so let’s see why this one gets less love than other editions of this Malt. 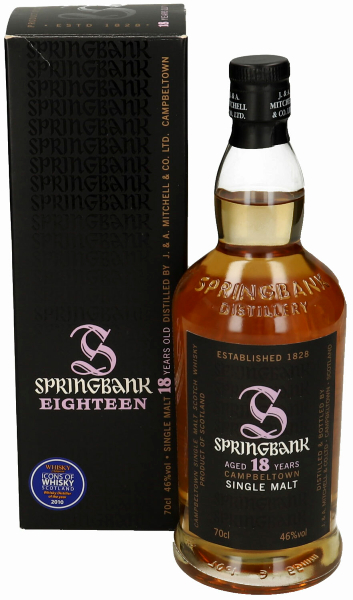 Nose: Fatty, yet fresh. Citrussy and fruity, but also waxy and some (wet) hay and dry coconut. Sometimes a bit farmy. Smoked sweet toffee, latex paint and soft wet wood. Wood that has been under water for quite some time. Burnt wet paper. Old matches (lit a long time ago). Very aromatic as a whole. In part a men’s perfume and otherwise quite fruity. Warm motor oil. Fatty. Easily recognizable as a Springbank. Smells balanced and really appetizing. This has a very good nose. Yellow fruits like white peach and tropical fruits like passion fruit and maracuja with a wee edge of smoke. Sweet and ripe smelling. Lime, candied pineapple and some almonds. Hints of sweat combined with the men’s perfume. The whole Whisky smells like a Whisky from yesteryear, you know, one of those Malts, people say, “they don’t make them like that any more”. Smells extremely well made and thus a wee bit old fashioned maybe, but then again, Springbank never smelled anything like anything else out there. Some more caramel and toffee, and some alcohol as well. Alcohol like you get from a cherry liqueur with a wee snuff of old white pepper, so not fully aromatic white pepper. Faded white pepper and add to that some warm anise (milk). Maybe this is a bed-time dram? Not woody at all, but there is this sense of toasted wood, although not much.

Taste: The taste is less big than the nose is. Well, initially it is, but the big fatty, nutty and fruity start dissipates rather quickly (making room for some wood and its bitterness). Still fruity, but also a bit thinner, maybe a tad more watery. Still quite warming going down. Here the age exerts itself through more wood and loads of almonds. With the second sip, the more waxy and nutty notes come to the front. Toffee and paper. Wax with citrus aroma’s blended in. Lemon and lime notes, not your orange or tangerine aroma’s. Although the woody bitterness does resemble the oils from orange peel a bit. Nice soft wood with (just) enough bitterness to let you know this is a well aged Whisky, and yes it aged in a wooden cask alright. Upfront are the waxy and toffee bits with the citrus and tropical fruits, the start of the body is the best. The more time you spend with this sip, brings out the more astringent woody bits and especially the bitterness of which there were no early warning signs of its arrival. The nose seemed so sunny and friendly and now this somewhat gloomy bitterness shows itself. It’s not bad, but it does come a little bit unexpected considering the nose. The finish is of medium length at best, and the aftertaste is somewhat dominated by the wood and its bitter friend. However, when this bottle was freshly opened, I don’t remember this bitterness at all. I guess this is what the breathing accomplishes. I have to admit, not every day is the same and personally it depends on the day how I get on with bitterness. Springbank almost always needs a lot of breathing, here with this one that is not the case. Strange, and again unexpected.

Yes, this is still a classic Springbank offering, yet not a big and bold one. As happens with a lot of offerings from this distillery, it only gets better over time. These Whiskies need to breathe to develop even beyond a point you couldn’t imagine when freshly opened, and this one was a good one right from the start, and as said above, quite different from Springbank 18yo bottlings form other years. We just love batch variation here! This one did develop to a high quite soon, but also managed to get past its top, and found its way down again. I don’t get that a lot with Springbank. As said earlier, this is not a Big Springbank, hence its reputation, so in this particular case the Whisky probably would have been even better at a slightly higher ABV. Around 50% I would say. This one is still a good one, hence the score.