Alas, we’ve come to the last of the five virtues. The four previous editions were all good, for me personally, especially “Metal” was very nice, but I love well aged seemingly simple ex-Bourbon casked Whiskies. All four are definitely interesting and different from one another. No duds between them. So now the time has come to put the series to bed with “Water”. Water is made with distillate from the winter of 2005, which doesn’t make things any clearer, since the year starts and ends in winter… Half of the Whisky was matured in second fill Bourbon Barrels and the other half in Sherry Butts. Although in some communications, Tomatin does mention Sherry Hogsheads as well (just not on the packaging). If memory serves me correctly, I really liked this one as well in London, and after the very nice Metal I have high hopes for this Water as well. 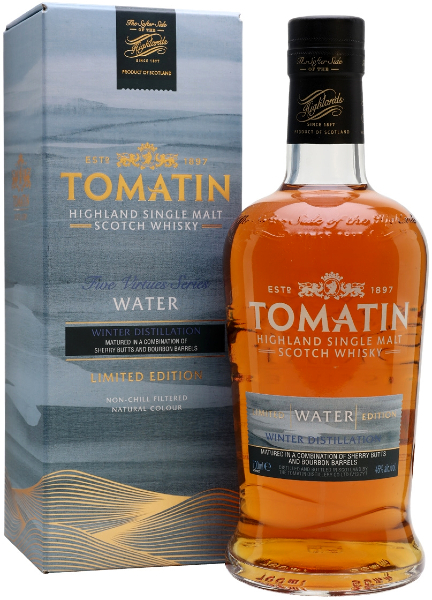 Color: Copper gold, like a Bourbon, definitely not the colour of water.

Nose: Spicy wood right upfront, with sweet smelling red fruits, hints of tar, an old warehouse with a stone floor, and toasted oak. Notes of wood and fresh air. Nutty, dusty and somewhat sharp and spicy. A take on modern Sherry casks, somewhat similar to the Sherry notes, (not the peat notes), of Benromach Peat Smoke 2010 I reviewed just recently. Old warehouse with old paper and pepper with hints of a more (smelly) organic note. Wet earth and a wee bit of virgin oak. Again a quiet and balanced expression from Tomatin with lavas and gravy and some more indistinct organics. Leafy with hints of old dried out leather and a garden bonfire. Nice (dried) kitchen herbs. The Sherry makes this smell “chewy”. More whiffs of paper are flying by. A Whisky for a sunny day.

Taste: Sweet and syrupy. Fruity. Jam-like. Red fruits. Thick. The Whisky sticks to my glass. This thick, fruity, (half) sweetness, somewhat masks the big note of wood this has as well, including the also masked bitterness. Paper again. Slightly tarry, as if tarry toffee was used for this one. Well balanced as expected. Raisins and ever so slightly soapy and definitely a bit smoky, must be the toasted oak. Vanilla and pudding are here as well, so these second fill barrels still worked their expected magic too, even though the Sherry bit turned out stronger in the mix. I noticed it in Metal, but Water is also a (designed or constructed) Malt which shows what its got, right from the start, lacking a bit in complexity and evolution. This is a minor gripe however, since the balance is there and it is a delicious (red) fruit-driven Whisky with enough back-bone to it. This is not a Sherry monster, but it still is all about the Sherry in this one. Classy stuff.

This is a great companion to Metal. Both are very good and quite different from one-another, but somehow fit together. Both are fruity, but with the Bourbon casks alone that were used for Metal, that shows us an entirely different yet classic Tomatin tropical fruitiness, whereas this Water edition shows us more the Sherry-linked red fruits, in this case, the thick jam-like red fruits. Amazing contrast. At first I thought, well lets review these last two samples I have, so I can open something else, but both are so nice I’m now wondering if I shouldn’t be opening both full bottles at once, after finishing off Earth. With the Metal-edition I was wondering how it would compare to the 15yo American oak. Here with Water I’m wondering how it would compare to the 18yo Oloroso version. Both the 15yo and the 18yo are from the standard range and widely available. “Wood”, “Fire” and “Earth” are all Whiskies which are good, but you have to work them a bit, all three aren’t really for careless sipping, or you’ll miss out on the best bits they have on offer. Metal and Water are good right from the start, more like instant gratification Malts, and in my opinion the best of the bunch.