Back to some wonderfully Sherried Bunnahabhain. Most of the last few bottles of Bunnahabhain I reviewed were younger and much paler (and peatier) than the bottle I’m about to review. Here we have an independently bottled Bunnahabhain from a highly active European oak Sherry butt. Even though this has aged for a respectable 30yo, and was bottled 10 years ago, I still feel 1979 is not that long ago. If you try this particular expression, it seems to come from another century, or another dimension altogether. I’ll keep it short here, because I feel a lot of words will be needed th describe the complexity of this Malt. 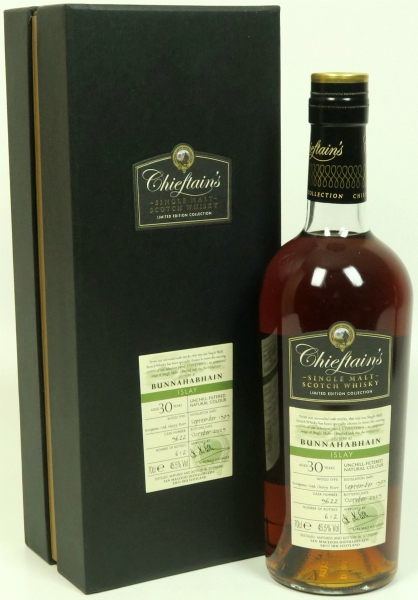 Nose: Fresh sea air. We didn’t see that one coming now didn’t we? Remarkably fresh, mint, yup mint. The mint you get from those hard mint sweets, not freshly cut mint, you make tea of. I did think it would be a cloying heavily Sherried Malt, but it’s not. Hints of toasted oak, charcoal and tar. Creamy vanilla powder, milk-chocolate, or better, plums in chocolate and a little bit of honey as well. Old distinguished wood. Wood polish without the petroleum smell, although very far back this does seem to have some petrol fumes going on. Caramel, tar, and some bits from an ashtray. Lots of Sherried notes obviously. Soft burnt sugar and a whiff of french cheese. Sherry and tobacco. It smells like it’s from another century altogether. Doesn’t really smell like a Whisky anymore. This must have been a very active cask. Still, nicely balanced and very chic. Fruity and coal, reminding me of early seventies Longmorn mixed with well aged calvados, since it has this apply feel to it as well. Just this bit though, not the whole experience, reminds me of Longmorn. Lots and lots of aroma’s and quite complex. Log fire and hints of fatty soft smoke. You can smell this one for hours before even thinking of taking a sip. You need to be alone for this one, and certainly not rushing it. If you smell it vigorously, it becomes meaty (gravy) for a brief moment, and some unexpected citrussy notes emerge as well. Beautiful wood notes re-emerge. Hints of old warehouse with old cardboard boxes in it. Dusty, quickly masked by the toffeed fruit. Although it doesn’t seem like it at first, this is a very high quality nose, which is immensely complex and has a lot to give. Wonderful.

Taste: Quite dry and woody, but also very tasty. Slightly soapy on entry. With lots of spices and borderline bitterness. Again you’re in for a treat. I have smelled this for quite a bit now, and doing so, I warmed the glass up in my hand. Fruity, but not much. I couldn’t even tell you what kind of fruit it would be. This has been a long time in cask. Tar and tobacco and maybe some leather. Not very heavy due to the relatively low ABV. Dusty and deep. So definitely a Malt that shows the Whisky can be about the wood it matured in. The creamy vanilla from the nose is lacking here, but definitely here, is the dry tannic wood and slight bitterness. Definitely not a chewy Whisky. Old and distinguished. Like an old mens club. Phileas Fogg style. The body falls back a bit. Finishes great, which makes up for the dry start, with a nice warming aftertaste. I like it. It’s a choice. Sure this could have been bottled (much) earlier. I don’t know if it was chance or choice, this has been allowed to age further, drying out considerably, yet picking up in “style”. It will be remembered for its great finish and the fabulous nose.

If you just pick this up and drink it, and don’t give it the attention it needs, you won’t pick up half of what its got to offer. If you do give it attention and time, wow! The more air it gets though, makes this Whisky less fruity and more about the wood, so know what you’re in for when allowing it to breathe for a while. Still, this is a wonderful malt either way, that develops enormously in the glass, so I can forgive its dryness with ease. 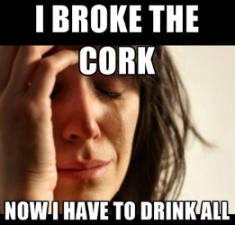 So it’s time to celebrate the first anniversary of Master Quill and I’ve picked this bottle of 1979 Scapa, bottled in 2002. Well, things got off really good! Like I said, I would rip open this bottle and so I did accidentally. I broke off the cork! Bugger!

Like with the Dun Bheagan range these Chieftain’s bottles are by Ian MacLeod. A few years ago I tasted its sister cask (#6633) blind and liked that one a lot, since I scored it 92 Points. Reason enough to look for this one for quite some time and snap it up at an auction.

Scapa is the lesser known distillery from The Island of Orkney. The better known obviously being Highland Park. Well actually, Scapa is one of the lesser known distilleries from Scotland! Scapa was founded in 1885. The distillery was closed a few times. The first time between 1934 and 1936 and the second time between 1994 and 1997. From 1997 on Scapa distilled Whisky again for a few months per year using staff from the nearby Highland park distillery. In 2004 the distillery is refurbished, and one year later Chivas Brothers (Pernod Ricard) buys the distillery. Scapa is now known for their 16yo that replaced the 14yo, that replaced the 12yo, that replaced the 10yo. Are you still following me?

Nose: Very musty Sherry, but already some black fruits are shining through. The initial musty smell wears off (a bit), and shows some spice and some coastalness (is there such a word?). Gets deeper and deeper, with a very balanced fruitiness. I guess this is one that needs to breathe for a while, but already is shows it’s potential. It does have some balls! What I like about this one that is has multiple facets, it changes on you if you give it time.

Taste: Yeah, this will be no punishment to drink all! Nice going. perfect combination of sweetness and fruits and in the mouth there is no hint of the sewer-like smell that was there in the beginning, (I may be exaggerating a bit). It has some wood, but the whole is so bold, it needs this spice and wood to pull it together. There is also some bitterness from the wood, but again this one needs it. At this point in time (freshly opened and needing to breathe)

it’s not completely balanced, but it will get there in the end. Complex, well, not exactly. It shows some sourness from the oak, but after half an hour it is pulling together, and it has a great and long finish. This again is a stunner!

Well I can say this, because I love this whisky (and it’s sister cask). It sweet and fruity, has a nice finish and this is well counteracted by several effects from the wood. Like Frank Drebin said; “I love it” (He actually said it several times…)