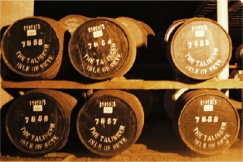 And here is Talisker. Talisker is a favourite of mine, a love affair maybe. It is a unique distillery on a unique island. Talisker is always good. So many big names from the past have slipped, some where good in the 60’s, but not now, some were good in the 70’s, but not now. Talisker isn’t one of them. Just buy any Talisker 10yo and it’s great. Even the worst Taliskers are still good. So the quality is alway delivered. Kudo’s to the people of Talisker. And when Talisker went cheating (Cask sold of to brokers or independent  bottlers), Talisker was still very interesting. Just have a look at the different Taliskers issued by Douglas Laing, (as Director’s Tactical). All those casks were probably sold off since they didn’t possess the typical Talisker markers. Peat, pepper and so on. But give these a chance and something extraordinary is revealed to you about the Talisker spirit. And again even the worst Taliskers from them are still good. That’s why I like Talisker very much.

Nose: Elegant peat and log fire smoke. Clean and fresh at first, but give it some time to develop. Perfectly balanced. Fern, leafy, wet forest floor. Gravy with a slight hint of mint. Some black peppered butter and toasted wood. Also a mysteriously depth, like there’s something very old that’s been kept secret. Some Brora like farmyness, and river clay. This just keeps developing.

Taste: Pepper! Animalesk. Sweet and woody (a bit sour). The clay from the nose comes through big time. Ash, almonds and putty. It has some sweetness hidden in the clay, but that disappears quickly. This is some great full-bodied stuff. The finish has some wood in it, slightly bitter and could have been a wee bit more balanced. Water does little for this whisky, so you’d better not.

This is great, but still I do understand why some people don’t like the 25 yo’s in particular. For a long time these didn’t sell so well, and because some of the earlier releases were quite big batches of 15.000 and 21.000 bottles. Now these are mostly still available, but again at the higher price from the beginning. People got wiser and start to ‘get’ the 25yo and started to appreciate them. Now it’s time for you to do the same…